In June 2004, after a period of falling ridership and revenue, Caltrain began operating a limited-stop express service, known as the Baby Bullet. Express trains used newly installed passing tracks in Sunnyvale and Brisbane to overtake slower local trains (as illustrated in the photo at right by Dan Klitzing). The start of Baby Bullet service marked a turning point for Caltrain, with weekday ridership rocketing from 25,000 to about 40,000 and farebox recovery ratio increasing to the mid-forties.

It was a welcome change to see Caltrain's transformation from a plodding public transit operator to a more strategic, business-oriented organization putting passenger service first. As evident in ridership statistics, Baby Bullet express trains consistently score the highest passenger load factors and are the greatest source of fare revenue for Caltrain.

Meanwhile, the California High Speed Rail Authority intends to transform the peninsula corridor into a four-track operation, with the slow pair of tracks shared by Caltrain locals and freight trains, and the fast pair of tracks shared by Caltrain expresses and high speed trains. The Memorandum of Understanding signed in April 2009 between the CHSRA and the Peninsula Corridor JPB (Caltrain) envisions "mixed traffic from Caltrain commuter rail and the high speed train service capable of operation on all tracks".

What exactly does that mean for Baby Bullet service?

Some Numbers To Connect 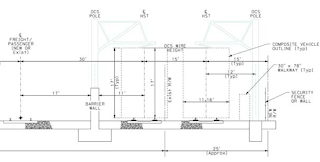 One doesn't need to wear a tinfoil hat to view the above points as possibly suggesting a "Dedicated HST" scenario on the peninsula corridor, with high speed trains operated entirely separately and independently from Caltrain. Why would this be bad for peninsula commuters?

Anyone who cares about flexible and efficient express commuter service--regardless of who provides it--should hope that shared HSR / Caltrain operations on the peninsula corridor aren't just empty talk. Making it happen will require more coordination and possible regulatory complication, but failing that, the Baby Bullet's days may be numbered.
Posted by Clem at 10:02 PM