Could this be the future look of the Transbay Transit Center? 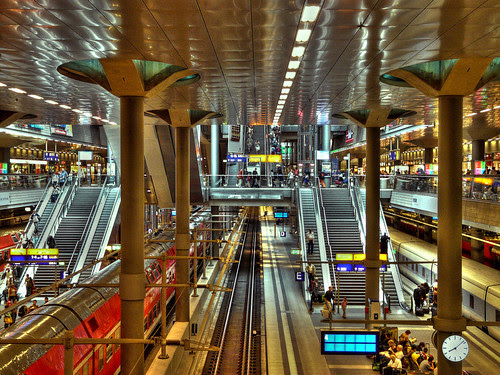 Sadly, no. It is a photograph of the underground level of Berlin's main railway station, opened in 2006 (photo by Ephemeron1). This is a state-of-the-art station that handles 1,800 trains per day. Note the following salient features:
Unfortunately, San Francisco's TTC will feature an underground mezzanine level, an oppressive underground waiting space not unlike Penn Station in New York City. Passengers will navigate through vestibule doors to escalators hidden behind six-foot concrete columns, with no view of the trains, arriving on the platform squarely in front of another six-foot concrete column. The platform level will be a semi-finished, non air-conditioned space... in other words, a basement.

UPDATE 6/14/2009 - great material showing up in the comments section. First, Richard Mlynarik takes the TTC architectural blueprints and whips up some 3D renderings of what the oppressive underground environment will actually look like:


Architectural design values are often rooted in cultural habits, developed over many decades. When it's time to do something differently, we Americans can't-- and commenter arcady puts his finger on why:

There's a big difference in philosophy between European and American station design. In Europe, the trains are within the overall architectural space defined by the station, in the grandest examples a big steel and glass arch covering the tracks and platforms. In America, the station is separate and distinct from the tracks, which are off to the side in what is basically a train yard. In Europe, passengers wait on the platform, and it's not unusual to see, say, a coffee shop right on the platform. In America, probably because of the tradition of low platforms and train-yard style stations, trains and passengers are kept separate until it's actually time for boarding, at which point the passengers go out of the station and to the train, oftentimes walking directly across other tracks. Hence, in even the grandest of US stations (Grand Central for example), the track area is generally ugly and utilitarian.

Excellent socio-architectural analysis. Can we break out of the mold?
Posted by Clem at 10:15 AM