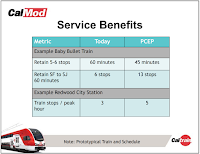 Zero trains per hour (tph) is the inaugural Caltrain service level at San Francisco's new Transit Center, which opened to the public today after a decade of construction. The grand opening of the center, with its expansive $400 million basement featuring ghost tracks, ghost platforms and a ghost passenger concourse will no doubt crystallize the increasingly urgent transportation need for the downtown extension (DTX) of the peninsula rail corridor. Only then will train service increase beyond the current level of zero tph.

The clear (and, as of today's opening, agonizingly present) need for the DTX sets up a deliciously fat and juicy prey for the transportation-industrial complex, which you can think of as a hungry snake. Here we are, in a strong economy, in one of the richest cities on Earth, facing a specific and obvious transportation need: they can name just about any price. The latest estimate for the biggest meal that the snake can swallow is six billion dollars, and that's only the start. Scope creep, dizzying amounts of contingency cushioning, and construction change orders are sure to drive it far higher. Civil engineering megafirms, labor unions, and complacent and poorly coordinated government agencies are salivating at the prospect of feasting on the DTX. The bigger it gets, the more sated and comfortable everyone will be, with the notable exception of the suckers who pay taxes and ride trains.


"It is difficult to get a man to understand something, when his salary depends on his not understanding it." This insight by Upton Sinclair applies to any attempt to reduce the scope or optimize the cost effectiveness of the DTX project. There isn't and probably won't be a true will to do it, but in a pretend world where the interests of taxpayers and riders came first, where might you start cutting scope?
Only after a draconian cost cutting exercise might it begin to make sense to build the DTX. At a price point of six billion dollars for a couple of miles of tunnel, we regretfully should keep service levels at zero trains per hour.
Posted by Clem at 10:46 PM 32 comments: