The Overtake That Won't Be 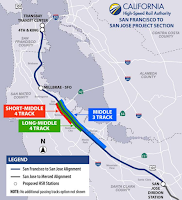 In its renewed environmental review process for the San Francisco to San Jose project, the high-speed rail authority is considering the alternatives for the peninsula rail corridor. The outlines of the new draft EIR are emerging, and this is where politics meets engineering.

Interested stakeholders keep asking about how the blended system will actually work, with Caltrain and high-speed rail sharing the scarce resource that is track capacity. The issue is being studied in some detail behind closed doors by an entity known as the Joint Scheduling Working Group (JSWG), consisting of experts from HSR and Caltrain aided by their respective consultants. As of the end of 2016, the JSWG had produced a first report on its work, which was shaken loose by a public records request from CARRD. Before digging into this, let's take a look back at how we got here.

While the original four-tracks-all-the-way HSR plan was collapsing in a firestorm of community opposition, Caltrain commissioned a study of blended system operations (8 MB PDF) from consultant LTK Engineering Services, to see if blending Caltrain and HSR primarily on the two existing tracks was viable. The 2012 study concluded that without any additional tracks, the corridor could support up to 6 Caltrain + 2 HSR trains per hour per direction, increasing to 6 Caltrain + 4 HSR with overtake tracks.  Key results were:
This study legitimized the blended system, which has ever since been the favored approach to bringing HSR to the peninsula rail corridor. The study contained numerous disclaimers to the effect that no official decisions had been made regarding future service levels, programmed overtakes, stopping patterns or scheduled trip times... all the important considerations that feed into a railroad's product, namely its timetable.

A short while later, LTK published another report (2MB PDF + 14MB Appendices) that can best be characterized as an expansion and refinement of the 2012 analysis, considering additional options. Key results were:
The disclaimers continued, with the conclusions of the study being described as "educational."

The JSWG was established in April 2016, a while after HSR had engaged the services of Swiss rail consultancy SMA. To avoid a standoff between dueling agencies and consultants, Caltrain/LTK and HSR/SMA are now comparing notes on their respective plans for the blended system. The JSWG's 2016 draft year end report (10 MB PDF) provides important context to the decisions now being made to select a "preferred alternative" for the HSR blended system EIR. This study is interesting for three reasons: it is the first blended system study led by HSR, it offers insight into the evolving ideas of the JSWG, and it is not sugarcoated because it wasn't intended for wide public distribution. Key results were:

Tea Leaf Reading
The constant refrain that nothing has been decided yet continues to this day, but the tea leaves are becoming quite readable. Here is some informed speculation:
One thing is sure: the "middle three-track" alternative should be added to the HSR EIR and studied in detail, with an eye towards designing the future blended system timetable. The timetable is the product, and it will soon be time to decide on one.
Posted by Clem at 1:24 PM 41 comments: