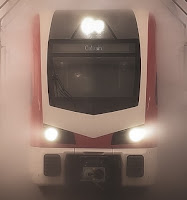 The first thing to notice about the new high-speed rail San Francisco - San Jose Draft Environmental Impact Report (DEIR) is that it sets up a straw-man alternative B, which is set to be dropped in favor of alternative A because it is less effective and more expensive. So we'll focus on the preferred alternative A, and ignore alternative B entirely.
Caltrain In The Hole
The DEIR assumes, in direct contradiction with Caltrain's official board-adopted service vision with eight trains per peak hour per direction (tphpd), that Caltrain will only be able to operate an inadequate six tphpd during the morning and evening peaks. By sub-optimizing the Caltrain timetable to be sparse and irregular, the high-speed rail authority is able to cheap out on new infrastructure by building almost no new overtaking tracks for alternative A. Where HSR needs to overtake, Caltrain is switched into a station siding ("in the hole") to wait five minutes, at Bayshore or Lawrence.
Meanwhile, the dense, regular and fast timetable envisioned under Caltrain's service vision also requires no new passing tracks, except at a new and expanded Redwood City station. Only when HSR is added to the traffic mix does the need for numerous new passing tracks arise; every single Caltrain overtake will still take place at the Redwood City station and nowhere else.
The Caltrain timetable scores highlight the enormous service quality difference:
What scenario do we subscribe to? Do we allow HSR to displace and cripple Caltrain? Does the arrival of HSR force Caltrain to build new passing tracks to continue operating its own service efficiently? Who pays for that, and to whom does the benefit accrue? Whatever happens, it is clear that the operational plans advanced by Caltrain and HSR are in direct conflict, with each agency laying separate claim to the valuable latent capacity of the rail corridor. Whatever the DEIR might say, both operators won't fit without significant new passing track infrastructure.
Section 3.2 of the HSR DEIR incorrectly states that Impact TR#14 (Continuous Permanent Impacts on Passenger Rail Capacity) would be less than significant, with the following dubious arguments:
The HSR DEIR does not adequately discuss the transportation impacts of permanently crippling future Caltrain service, and alternative A stands in direct conflict with Caltrain's officially adopted service vision. Appendix 2-J fails to address the policy consistency of the DEIR with Caltrain's business plan and service vision board resolution-- indeed it fails to even acknowledge the very existence of the Caltrain business plan, one of the most important policy documents relating to the peninsula rail corridor.
Safety
Section 3.11 examines numerous safety and security implications of the HSR project, but inexplicably fails to mention the safety issues of operating trains at 110 mph past platforms crowded with waiting passengers. Many Caltrain stations have narrow (15-foot wide) side platforms that are cluttered with obstacles such as shelters, wheelchair lifts, and mini-high platform blocks, leaving little clearance from the yellow safety stripe behind which passengers are expected to wait, 9 feet from the track center line. Existing conditions are already borderline unsafe, such as when a 79-mph express blasts by the packed northbound platform at Mountain View. Increasing train speeds to 110 mph will likely require the yellow safety stripe to move further than 9 feet from track center, potentially resulting in incompatible and unsafe station platform configurations. The DEIR should include mitigation measures to maintain an adequate level of safety for Caltrain passengers waiting on station platforms.
Curve Straightening
Remember the Top Ten Worst Curves post from a decade ago? The DEIR describes how many of them will be flattened to enable higher speeds. Here's how they fare, in order of impact to trip times:
The most expensive one to fix will be San Bruno, due to Caltrain's lazy and inexcusable lack of foresight when their new grade separation design baked in a 65 mph speed limit. San Bruno was the subject of much yammering on this blog, but is now cast in concrete that will have to be demolished at great additional taxpayer expense. In the DEIR, the rebuilt northbound platform is inexplicably shortened to an operationally inadequate length of 627 feet; this should be increased to a minimum of 750 feet per Caltrain standards. The wholesale reconstruction of the station probably also rates a discussion of impacts elsewhere than under curve straightening; as described it's sort of a stealth project.
The curves previously ranked #7 through #10 were already good for 110 mph, so they will not be modified. However, there are some other extraneous curves that were not in the Top Ten list that will result in speed restrictions lower than 110 mph. These are:
Curves C133/C134, at the north end of San Mateo station, are particularly odd and ill-placed.
Separate Platforms Forever
Sadly, the DEIR enshrines the plan for separate station platforms for Caltrain and HSR, with not the slightest attempt to make the two systems operationally compatible. Neither agency seems inclined to solve the thorny technical and regulatory problems: Caltrain has gone so far as to procure dual boarding height trains, but then shrank back from the plan after metal had been cut, abandoning in-vehicle lifts that would allow boarding and alighting at different platform heights. This is not an easy problem to solve, but it is well worth the effort to create the operational flexibility that is taken for granted in other busy rail corridors around the world.
Ultimately, the whole high-speed rail EIR process feels like theater: by the time the funding materializes to make it worth expanding the system to the peninsula rail corridor, the proposed project will have been overcome by events. The environment of the project is a moving target, and right out of the gate, the draft EIR is already oblivious to its changed context.
Posted by Clem at 8:58 PM 37 comments: