Caltrain just released the final Request For Proposals for their new electric train fleet.  Train manufacturers will now prepare detailed bid packages, and in early 2016 a winner will be selected to build an initial fleet of 15  electric trains that will enter into commuter service in 2021.

Several changes were made to this document after the draft RFP was circulated for industry review.  The single most remarkable change is that level boarding and platform sharing with high-speed rail is now a firm requirement, instead of an option suggested by stakeholders.  These are the words from section 2.2.1.1:


CHSRA trains will run over the same alignment and stop at some of the same stations as JPB trains. The bi-level EMU must therefore have the same interface with the infrastructure as the future High Speed Rail cars, including clearance envelope, and platform boarding height.

JPB plans to raise platform heights to approximately 50.5-50.75” ATOR (to interface with a vehicle threshold height of 51” ATOR), initially at San Francisco, Millbrae, and San Jose stations. Other station platforms on the JPB system may ultimately be raised to the same level.

This is not only an endorsement of level boarding.  It is an endorsement of complete integration with high-speed rail including not just shared tracks but also shared stations.  It is a major step forward for riders and taxpayers, because it will increase the speed, efficiency and usability of Caltrain at the same time as it makes high-speed rail more affordable.  It will help bring to California what Europeans take for granted.

Section 3.3.3 of the RFP details Caltrain's new high platform interface:
Caltrain has entirely dropped the previous plan to implement level boarding at a height of 25 inches, which would not have been compatible with high-speed rail and would have created significant complications in the station infrastructure served by both systems.

The new EMUs will have two sets of doors, not just as an option but as a non-negotiable requirement.  The RFP describes the configuration in section 12:


Each vehicle shall have eight door openings, four on each side of the vehicle, directly across from each other. One set of four shall be located just inboard of the trucks and the other four above the trucks. The set located inboard of the trucks (the low level set) shall be compatible with JPB's existing platform height and existing mini-highs. The set located above the trucks (the high level set) shall be compatible with JPB's future high level platforms.

A large number of bikes (at an 8:1 ratio of seats to bikes) will be stored on the lower level of two cars per train.  They will access the high doors using wheel ramps built into the stairs between the lower bike level and mid level vestibule of the train.

While this is a rather unique configuration, no other train operator worldwide has had to plan for a system-wide platform height transition of more than four feet of vertical change.  For such a large height transition, it makes perfect sense to use the vehicles as a tool to enable the flexible and independent reconfiguration of each individual platform, without imposing system-wide construction schedule or funding constraints.  It is an unusual but quite logical solution to an unusual problem.

The upper set of doors, which will provide level boarding at new high platforms, will feature retractable door threshold extenders, to bridge the gap between the train and the platform.  These are described in section 12.2.12 of the RFP.

Looking Ahead to a Well-Blended System

Caltrain has come a long way on the issue of level boarding and blending with high-speed rail.  A key architectural decision has now been made that will ensure the future success of the blended system.  In the 2020s, Caltrain passengers of all abilities won't give a second thought to the seamless experience of boarding a train, and will take for granted the brevity and punctuality of station stops.  Meanwhile, a few train nerds will photograph the platform interface.

In the meantime, three cheers for compatibility!
Posted by Clem at 9:35 PM 80 comments: 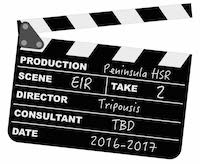 Environmental clearance of high-speed rail in the peninsula rail corridor was initiated right after the Proposition 1A bond passed in 2008.  The development of engineering and environmental documentation for a four-track alignment connecting San Francisco to San Jose was in full swing during the years 2009 and 2010.  The Peninsula Rail Program, as it became known, was an ambitious yet awkward collaboration between the CHSRA and Caltrain, with the engineering consulting firm HNTB doing most of the heavy lifting.  The decision to concentrate HSR resources in the Central Valley, combined with fierce community opposition on the peninsula, brought the process nearly to a halt in early 2011.  By that time, thousands of pages of documents had been drafted, hundreds of stakeholder meetings held, and $45 million spent for preliminary engineering and environmental clearance.

Then came a long pause during which two major developments took place.  First, as a result of a political compromise, the idea of a four-track high-speed railroad was dropped in favor of a "blended system" where Caltrain and HSR would share the peninsula corridor primarily on two tracks, with less impact to surrounding communities.  Second, the Caltrain electrification project came closer to being realized, passing key milestones of environmental clearance, funding, and procurement.  Throughout this pause, plans for peninsula HSR became somewhat nebulous, both in their scope and timing.  The media spotlight turned away.

Fast forward to the August 2015 meeting of the California High-Speed Rail Authority (YouTube video).  As reported by the Fresno Bee (and without a peep from the Bay Area press) we have the first hints of what lies ahead, in the form of a Request For Qualifications issued by the CHSRA to re-start the environmental clearance process for the peninsula.  This RFQ lays out a new timeline and a $36 million budget allocated over a term of three years, shared between two sections: San Francisco to San Jose, and San Jose across Pacheco Pass to the Central Valley wye.  The following schedule milestones are envisioned:
The timeline for actual construction is not specified, but it rarely begins immediately after EIR certification, since final design and the inevitable CEQA lawsuits take time.

Highlights from the RFQ

The RFQ deliberately does not reveal the scope or exact nature of the alternatives to be studied, but it does contain some interesting nuggets:
EIR Cost Magnitudes

Environmental Impact Reports are extremely complex and voluminous documents designed to clear a project under the California Environmental Quality Act, ensuring that impacts are properly disclosed and mitigated.  It takes a large team of engineers, environmental specialists, writers and lawyers to concurrently design a project and pull together an EIR that can pass legal muster without incurring years of litigation.  To understand exactly where the process currently stands for peninsula HSR, it helps to remember that the published record for the San Francisco to San Jose project section forms only the tip of the iceberg.  The vast majority of the material assembled by HNTB in 2009 and 2010 remains unpublished, to be continued by this new contract.

How much EIR preparation did the $45 million spent so far buy?  We can establish an extremely crude metric for the cost of one EIR page by taking the ratio of the cumulative cost incurred for the preliminary design and environmental clearance of a project, as of the time of EIR certification, divided by the total number of pages in the resulting EIR.  Here are some examples:

Given that the new consultant won't be starting from scratch, it's conceivable that there will be sufficient budget in the new contract to produce a full EIR for the blended system on the compressed two-year timeline envisioned in the RFQ.

The CHSRA and Caltrain take great pains to remind everyone that we won't know what the blended system for the 50+ mile peninsula corridor will look like, nor what the blended service plan will be, that is, until the Alternatives Analysis is released next year.  The specific discussions regarding the scope of the blended system are underway behind closed doors.  Taking into account the phased and incremental nature of the project, one can engage in some informed (wishful?) speculation, listed from north to south:
The next formal step in the process will be a new Notice of Preparation (NOP) to be published by the FRA in the Federal Register, an action that could come in the coming months.  Then we'll party like it's 2009.
Posted by Clem at 11:29 PM 61 comments: