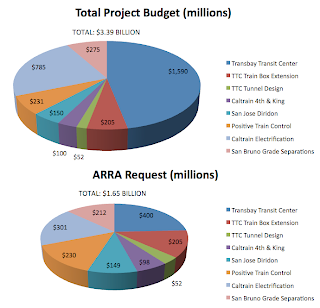 The MTC report contains a few surprises. But first, here are the projects contained in the $1.8 billion peninsula funding request. Also refer to pie chart at right.
Projects with an asterisk (*) are funded nearly entirely out of the stimulus. Those without an asterisk have additional sources of funding already allocated.

ARRA stimulus funds are targeted for so-called "shovel-ready" projects that can create short term jobs. That puts the California High Speed Rail Authority's San Francisco to San Jose HST project out of the running; the high speed rail project on the peninsula is in the early stages of an environmental clearance process that promises to be highly contentious, to be completed in 2011 at the earliest. While design work is already well underway, the controversial quadruple tracking, the numerous grade separations, and the wholesale reconstruction of nearly every Caltrain station planned by the CHSRA are not even close to shovel-ready.

That evidently pushed the MTC to split the construction of high speed rail on the peninsula into two phases. The first phase (as listed above) consists of a patchwork of projects that were already in the planning / environmental clearance pipeline before Proposition 1A was passed and HSR became a realistic prospect. It's definitely a pragmatic approach, with some caveats discussed below. 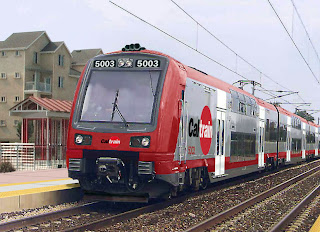 Caltrain, with its appointed three-county board of directors, has historically held very little clout in getting its major capital improvements prioritized by the MTC. As recently as a few months ago, the MTC re-allocated $91M of Dumbarton rail (a.k.a. Caltrain) funding over to BART. Caltrain's biggest capital improvement project, planned for decades but with an ever-receding construction start date, is the electrification of the peninsula corridor with 25 kV overhead wires to provide quicker and more modern service. (artist's concept at left).

In the Peninsula Corridor Investment Strategy, Caltrain projects are suddenly front and center, thanks to their relatively advanced state of shovel-readiness and some new-found political support. This is a welcome change from the usual BART über alles funding strategy.

Caltrain electrification was always considered an unwelcome fly in the BART-around-the-Bay ointment. Now that billions of HSR funding have materialized, the Bay Area transportation-industrial complex is seemingly more attracted to HSR than to BART, if that is even possible. This changes everything: far from being an impediment to BART, electrification is now a "foot in the door" for bringing high speed trains into San Francisco and undertaking some very juicy construction projects during Phase 2--including several billion dollars of grade separations.

For thousands of Caltrain commuters, it should be welcome news that electrification has gone from problem to solution. Nevertheless, one question comes immediately to mind...

Is The Cart Before The Horse?

Does it make sense to electrify Caltrain in Phase 1, only to rebuild the corridor once the HSR project is environmentally approved and construction begins for Phase 2?

Pros:
Cons:
Not that any of this matters, since the agenda is more political than technical--but thankfully, the pros do seem to outweigh the cons on a purely technical basis.

A few months ago, the Transbay Joint Powers Authority (the agency charged with building the new Transbay Transit Center) got into a tiff with the CHSRA over the adequacy of their train platform layout. Entrenched in conflicting positions, the TJPA designed a 150-meter radius curve (extremely and impractically sharp) into one end of their platforms, while the CHSRA adamantly insisted on perfectly straight 400-meter platforms. We didn't hear any more about this little mind-the-gap issue, until now.

The Peninsula Corridor Investment Strategy asks $205 million for a "Rail Platform Extension" which would extend the train box north-eastward from Beale St. to Main St., as shown in the figure at right, to enable the sacrosanct straight platforms.

Sadly, it's another design by committee. The CHSRA's straight platforms are not a valid technical requirement. The underlying requirement concerns the admissible gap between the platform and a train's doors... and any reasonable value of that gap will still allow for some amount of curvature, however slight. For example, a 1 km radius will produce an additional gap of 5 cm (2 inches) at most. As if proof were necessary, high speed trains stop at curved platforms in nearly every county that has them.

Extending the train box has enormous potential for the Transbay Transit Center, for other reasons than making the platforms perfectly straight. That potential would be fully exploited by a proper design of the train box, to be discussed another time. And why does a 250-foot extension cost another 50% more than the basic train box?

Bang for Buck: Medium (for reasons unrelated to platform curvature)

A worthy project provided they do it right and straighten the darn curve.

Caltrain had unfunded plans to modernize and expand the 4th & King terminal in San Francisco, as part of their Project 2025 plan. They even have a track layout in mind. For this, a design totally removed from system-level optimization of San Francisco rail operations, they are asking $98 million.

If somebody cared enough to configure the Transbay Terminal correctly, perhaps the 4th & King station wouldn't need to make up for Transbay's glaring lack of capacity.

Bang for Buck: Low (if only they fixed Transbay instead!)

The Investment Strategy calls for fully $230 million (!) to implement positive train control on the peninsula corridor. While PTC would finally bring the corridor out of the 19th century, why is Caltrain in the driver's seat to define the system for all of California? And why are they re-inventing the wheel by "defining the requirements" for a "new signal system" when this technology is a solved problem, sold as a commodity off-the-shelf item by countries that already have modern railways? Buy a fully debugged ETCS Level 2 system from your choice of several established vendors, and be done with it already! This is sure to become another disastrous R&D project.

San Jose's naked ambition to become the Grand Central of the West is on full display, with a $150 million grab to build a new station whose grandiose architectural configuration is rooted more firmly in a civic inferiority complex than any realistic transportation need.

In closing, can we really expect $1.8 billion dollars (more than 20% of the nationwide high speed rail stimulus) to land in the Bay Area? Probably not. Whatever the Bay Area may score in Washington, the Peninsula Corridor Investment Strategy reveals a great deal about the region's evolving funding priorities.