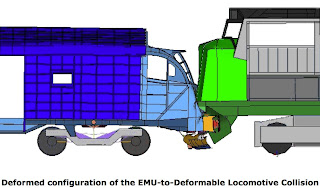 Some interesting documents recently showed up under docket FRA-2009-0124, Caltrain's petition for waiver of compliance with certain FRA rail vehicle design regulations. While the comment period closes on March 12th, there are no comments posted yet, perhaps a sign of the extensive stakeholder discussions that moved this waiver application to where it is today. These fascinating documents include (see Docket File):
For the technically inclined, this makes for some very interesting reading. The picture that emerges is that of a very limited and surgical waiver of a few requirements within a regulatory framework and development environment that remains firmly anchored to the world of freight trains.

Sometimes, it's useful to step back and contemplate what we are attempting to build here on the peninsula. Might things not be simpler if Caltrain and the CHSRA invoked paragraph 8.3.(c) to build "a transportation system that is a significant change in the method of delivery of Commuter Service which would be incompatible with Freight Service on the Joint Facilities" ?
Posted by Clem at 10:50 PM 21 comments:

Trains or the Tree 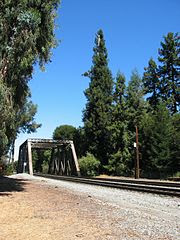 The Palo Alto Daily Post, a free print-only publication than never misses a muckraking opportunity to drum up advertising dollars, is stepping up its HSR fear-mongering another notch. Just like it did one year ago, the Post headline blares: It's Trains Or the Tree. Fast rail will doom fabled redwood.

Palo Alto arborist Dave Dockter is quoted as saying "The best scenario for the tree would be no rail project. The second best would be to tunnel way down deep under the tree so as to not mess up its roots and the hydrology, but there couldn't be an above-ground scenario near the tree; that would be catastrophic."

The rest of the article suggests that Dockter may have been shanghaied into this sensational story. He goes on to say that if anything can be done to save the tree, it will have to spring from a determined joint effort between rail officials and tree experts. "All the nation's best arborists and engineers would have to come around that tree and be on the same side, not as an adversarial relationship, but as an engineering challenge. Engineering needs to meld with nature."

Just like a year ago, the relevant facts on this issue remain the same:
This provides yet another reason for the project to hire an arborist. If Dockter had a counterpart, he might not be so inclined to let the Daily Post to stir the HSR pot. In the meantime, there can be little doubt that engineers and arborists will eventually see to it that El Palo Alto is safe.
Posted by Clem at 9:48 PM 8 comments: 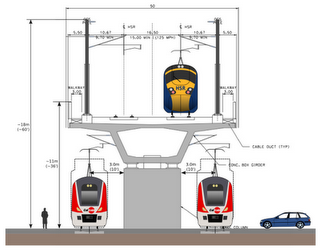 Tim Cobb, whose firm HNTB is performing engineering work for the Peninsula segment, said the alternatives analysis is also considering stacking train tracks in sets of two. This could entail keeping the two existing Caltrain tracks in their current alignment and building two new high-speed-rail tracks either above or below them. This appears to be a particularly viable option at areas where the right-of-ways are narrow, such as Churchill Avenue, rail officials said.

Track stacking is a design that communities should beware. While it may solve the problem of threading four tracks through narrow right-of-way pinch points without taking adjacent properties, it has many disadvantages.
One might reasonably conclude that stacked tracks are a badly overwrought solution to the perceived problem of residential takes.

Taken for granted in this crazy talk about stacked tracks is an assumption that a 100-foot wide swath is required if all four tracks run on the same level. That 100-foot peg won't fit in some of the 60 or 75-foot holes that dot the peninsula corridor.

As it turns out, this 100-foot figure includes expansive margins for cable ducts, utility easements, maintenance walkways and drainage structures. In a pinch, the tracks can be spaced just 15 feet center-to-center. So are we going to build a 60-foot tall structure just so drainage trenches will fit and AT&T can run some fiber optic cable on the right of way? No, we shouldn't. With some creative engineering, four tracks can and do exceptionally fit within a 75-foot right of way, even with drainage and utilities. It makes no sense to build tall viaducts or tunnels because we're short a few feet for these ancillary items.

Which brings us to land takes, a.k.a. eminent domain... the third rail of peninsula HSR politics.

Destroying the Village In Order To Save It

With growing opposition to HSR on the peninsula, program managers are walking on eggshells, especially when it comes to taking any residential land. What they fear most in eminent domain proceedings is neither cost nor delay (both would likely be minimal), but the political fallout and galvanized opposition to the project.

Seemingly bending over backwards to avoid residential land takes at all possible costs, HSR designers are now contorting themselves into these stacked design alternatives possibly as a veiled signal to the communities. Perhaps it is their calculation to elicit such a negative response that the communities themselves will suggest far more reasonable solutions--solutions that may involve a residential take here and there. Whatever the underlying motives might be, peninsula cities should be suspicious of stacked tracks, and weigh the relative community benefits of carefully optimized and very limited residential takes. And communities will need to take the initiative on this, because the HSR project politically can't and won't.

In some cases, eminent domain is not just a last resort: it may be part of the "best" and overall lowest-impact design solution.
Posted by Clem at 10:17 AM 55 comments: 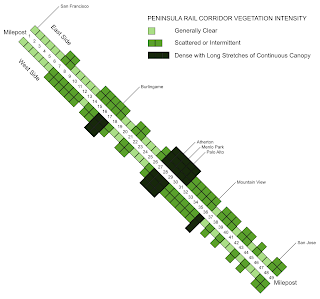 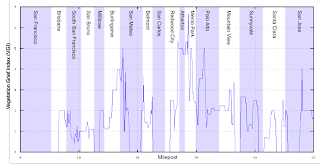 That might suggest that a key position is missing from the Peninsula Rail Program: a full-time certified arborist.
Posted by Clem at 8:42 PM 21 comments: