Caltrain Does the Right Thing: Nothing 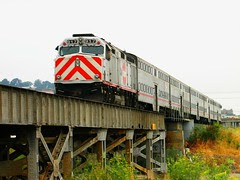 For a few months after the passage of Proposition 1A in November 2008, it seemed as if Caltrain was conducting business as usual on its capital improvement program. They are finally showing signs of waking up to HSR and its implications for the numerous capital projects in their pipeline. (photo by PBO31)

In April, Caltrain placed the renovation of the South San Francisco station on hold. This $50 million project, fully funded and at the 90% design stage--the shovel doesn't get any readier--was shut down at the last minute over uncertainty in the plans for HSR and the future configuration of the Union Pacific freight yard located there. The project will resume when more is known about detailed HSR plans for the area, probably within the next two years.

Further south and for the better part of the decade, Caltrain had plans to replace century-old, seismically unsafe, low-clearance bridges just north of downtown San Mateo. These antiquated bridges, crossing over Poplar, Santa Inez, Monte Diablo and Tilton avenues, are so low that even the Google Street View camera car nearly crashed into one. The work on this $27 million project was to start this summer. Not only would these four bridges need to be rebuilt and expanded for HSR, but they are also located in an area where the future vertical alignment of the tracks is highly uncertain, depending on how the new tracks are routed through downtown San Mateo. A San Mateo resident rightly complained about the disconnect. Recently, Caltrain announced they were opting for a better approach, consisting of a basic seismic retrofit and continued maintenance to extend the lifetime of the bridges just long enough to find out what will happen with HSR.

As part of their announcement, they stated: Caltrain is assessing its extensive capital program to better coordinate with high-speed rail and to make certain that today’s investments are not deemed obsolete in the near future.

Better do it right than do it twice.

The Shape of Palo Alto

Why does the shape matter? While the area around the tracks in Palo Alto is pretty flat, small variations in the terrain do have an effect on how the high speed rail project will be configured as it crosses through town. The vertical alignment of the tracks must not only conform to the surrounding grade, but it must be routed over or under every creek, road, pedestrian or bike crossing while conforming to acceleration limits imposed by passenger comfort as well as train stability and performance.

There have already been strong hints as to what shape this vertical alignment might take, as previously discussed in Focus on Palo Alto. As part of its program-level EIR/EIS, the California High Speed Rail Authority produced a set of maps of the Caltrain corridor that fueled a firestorm of controversy in Palo Alto, with residents worried that raised tracks would form a Berlin Wall and divide the city. While the CHSRA now professes to consider all vertical alignment options for its project-level EIR/EIS, ranging from tunnels to elevated tracks, there aren't that many feasible and affordable ways to design the vertical alignment of HSR tracks through Palo Alto-- and it turns out that the shape of Palo Alto can tell us a lot about what those are.

Working from Caltrain track survey data, here is the shape of Palo Alto, with the vertical scale greatly exaggerated: (click to expand)

Note a few salient features:
As we consider various grade separation options, keep this in mind: while grade separations are a sine qua non condition for high speed rail, they could also become necessary in other non-HSR scenarios for the peninsula. For example, if Caltrain traffic increased to the point that grade crossing gates blocked rush hour traffic for too long (such as if HSR were to terminate in San Jose), or if BART were to connect Millbrae to Santa Clara, as originally planned in the 1960s. Grade separated tracks are by no means a unique requirement of HSR; they are likely to be required in Palo Alto within the next few decades, HSR or not.

Before evaluating various vertical track profile options in Palo Alto--especially if you're going to have a charrette--it's important to lay out a few simple, fundamental design rules that govern what you can and can't make the tracks do. 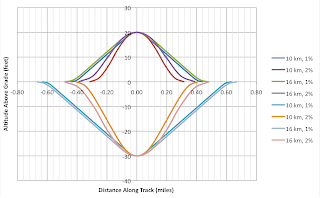 The chart at right shows vertical track profiles for various combinations of these parameters. On the top half of the chart is a 20-foot elevated grade separation, with representative 1% or 2% grades and 10 km or 16 km vertical curve radius. On the bottom half is a 30-foot depressed grade separation (trench), with the same variations of grade and vertical curve radius. The chart gives you an idea of how long these structures need to be, based on how high (or deep) they are.

Elevating the tracks over Palo Alto's few remaining grade crossings is one scenario being proposed by the California High Speed Rail Authority, and is likely the cheapest.

Taking a step back: the only reason to elevate track that isn't already elevated is to lift the track over a road or pedestrian underpass, also known as a grade separation. The only place where that might happen is in the vicinity of grade crossings. Elevating the track anywhere else would serve no purpose and is not being contemplated.

With respect to the outcry over the community impact of raised embankments, it's worth looking at another scenario... and it doesn't involve tunnels! While tunnels are often contemplated as the only possible alternative to embankments, it is possible to grade separate the Palo Alto crossings by depressing the tracks into trenches. Trenches are preferable to tunnels because they can be narrower and involve far less earth moving and concrete works... although still far more work than embankments.

While the depressed trench scenario introduces several challenges, they pale in comparison (and cost) compared to building a full-fledged tunnel.

Despite the recent controversy in Palo Alto, the city is not even close to being the most difficult to build high speed rail. There are far more challenging puzzles up and down the peninsula, for example downtown San Mateo. Many of the same design principles apply to any location on the peninsula, and as time allows we'll start discussing some more of these puzzles. As for Palo Alto, the squeaky wheel gets the blog grease!
Posted by Clem at 9:26 PM 46 comments:

On August 8th, 2008, the cities of Atherton, Menlo Park, and a number of environmental and transit advocacy groups filed a lawsuit seeking to overturn the CHSRA's July 9th 2008 certification of their Bay Area to Central Valley program EIR/EIS, for failing to properly meet the requirements of CEQA environmental review regulations. This lawsuit, often characterized as an act of peninsula NIMBYism, will be heard later this month in Sacramento Superior Court.

10 interesting facts about the lawsuit:
Whatever the outcome, it should be interesting to watch. Make sure to have a plentiful stock of popcorn.
Posted by Clem at 10:21 PM 64 comments: