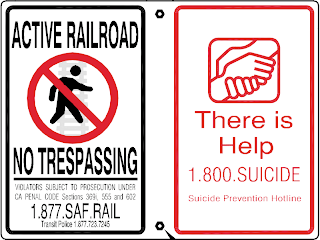 Not even 24 hours later, Palo Alto HSR opponents are turning this tragedy into another tunnel-or-nothing rant. On the Palo Alto Online forums, one of the leaders of the Palo Alto anti-HSR group expounds:

Lets not let these two poor kids have died in vain (plus the ones last year, year before, year before that, and on and on..) I think it would be a very powerful message to Obama administration, FRA, and California legislators if the kids banded together to write letters or something asking for laws to require the trains to be undergrounded, kept out of neighborhoods. (...)

If they can't get the trains out of here all together (which they probably can't, or won't), they need to put them underground, sealed off and away from access to cars, pedestrians, bikes. Fences along the tracks are going to be useless to prevent people, especially kids, who have the intention of using trains for this purpose.

This is wrong on so many levels.
My apologies for the temporary deviation from more substantive blog material. May she rest in peace.
Posted by Clem at 8:25 PM