The CHSRA just released its Draft Scoping Report on the San Jose to San Francisco segment of the route. This report summarizes and categorizes the numerous comments received from federal, state and local agencies and governments as well as members of the public. Numerous appendices include all the raw input for this process, the so-called "scoping comments" that were submitted a few months ago in response to public scoping meetings held on the peninsula. The CHSRA is taking no chances with the environmental clearance process, leaving an extensive trail of documentation that proves the process was scrupulously followed. 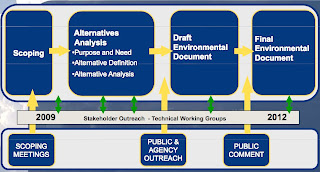 The environmental clearance process can be a bit obscure to a newcomer. The CHSRA provides an overview that includes the figure at right.

The process is governed by federal (NEPA) and state (CEQA) law. Due to the large scope of this project, the law allows for tiering of the environmental review, with a statewide program-level environmental review (completed and approved in 2008) followed by a more detailed project-level review of the peninsula, which is now getting underway and is due for completion in late 2011.

The final result of the environmental review process is an environmental impact document known as an EIR (Environmental Impact Report) under CEQA, and an EIS (Environmental Impact Statement) under NEPA. A single document satisfies both regulations, thus resulting in an alphabet soup known as an EIR/EIS. When the project EIR/EIS is approved by the board of the CHSRA, any litigation has run its course, and design has proceeded sufficiently far, the project is "shovel ready". That is planned to happen on the peninsula as early as 2012.

What just happened over the last few months is scoping, and you had to live under a rock not to know about it since it was covered extensively in the local press (see archive). As its name implies, scoping determines what will and won't be included in the environmental review. After scoping is complete, it's too late to raise new issues to stop the project under CEQA or NEPA.

Scoping is pretty bland at this point: a giant pile of inputs is collated into broad categories and decomposed into an all-encompassing listing of the issues raised by all the stakeholders. Everything is still on the table at this point. It's mildly interesting to dig through it to see what everyone has to say, although reading the phone book might be more entertaining.

The next step in the environmental review process is alternatives analysis. The CHSRA will describe a broad set of alternatives (based on scoping inputs) and then select those that will be carried forward for detailed analysis. This involves discarding any alternatives that are not considered feasible or practicable, using structured evaluation criteria. This is where design options will start getting taken off the table, and sparks will really start to fly.

You can read an example of an Alternatives Analysis report for another segment of the HSR project, from Los Angeles to Anaheim, to get a flavor of what's coming to us. This project is slightly further along the process than San Jose to San Francisco. The alternatives analysis for the Caltrain corridor is currently expected around January 2010, just six months from now.