Build Me A Train Box 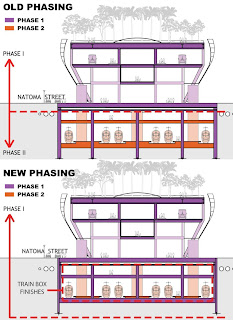 The San Francisco Transbay Joint Powers Authority (TJPA), charged with building the new Transbay Transit Center, is now pursuing $400 million of federal stimulus funds to build the underground "train box" that will eventually serve as a downtown station for HSR and Caltrain.

The train box had been descoped in a phased approach adopted in June 2006, whereby the above-ground bus terminal would be built first in Phase 1, followed by a "top down" excavation of the train box below in Phase 2. This plan deferred the greatest expense until later: Phase 1 was estimated at $1.2 billion, compared to Phase 2 at $3 billion--for which few funding sources were identified. The availability of stimulus funding, and in particular an $8 billion slice allocated to high speed rail, has altered the TJPA's equation.

In its next board meeting on June 14th, the TJPA board will formally direct the design team to proceed with the train box included in Phase 1. Train box finishes (tracks, platforms, escalators, etc.) will be added later in Phase 2.

Thinking Inside the Box

The good news is that building the train box now undeniably saves money in the long run, since digging a cavernous hole underneath a fully operational bus station is no mean feat of engineering. Advantages of building the train box in Phase 1 include:
The bad news is that rushing the train box component of the project to achieve "shovel readiness" threatens to lock in certain detailed design features that may later turn out to be ill-advised when someone actually tries to build an efficient, functioning, workable train station inside the box in Phase 2. 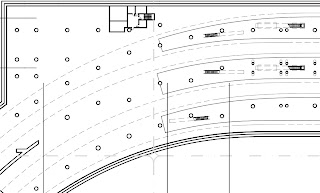 The problem basically boils down to reinforced concrete columns. The entire weight of the above-ground portion of the terminal building is carried into the train box foundations through a dense forest of concrete columns, typically 5 to 6 feet in diameter, spaced every 42 feet. These columns were placed in such as way as to prevent a reasonable layout of the tracks entering the station. As discussed in Focus on SF Transbay Transit Center, the TJPA's design for the station's "throat" is a disaster that urgently needs review by competent rail professionals before any concrete is poured... and the columns peppered throughout (see diagram at left) will literally set the design in concrete.

The TJPA's agenda item mentions a Peninsula Corridor Investment Strategy, presumably hammered out among the TJPA, the Metropolitan Transportation Commission (MTC), Caltrain and the CHSRA, to keep inter-agency conflict at a minimum in the methodical pursuit of stimulus funding. This strategy was likely included in the Bay Area Council's Economic Recovery Work Plan, which is said to request $3.4 billion for Bay Area high speed rail improvements under the following headings:

The dollar amounts are rough estimates, since they are not mentioned in the Recovery Work Plan. If the Bay Area secures even a fraction of this funding, get ready for quite a bit of construction, undertaken without a single cent of Proposition 1A high speed rail funds. Who would have guessed, last November?
Posted by Clem at 11:42 PM