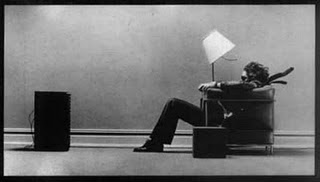 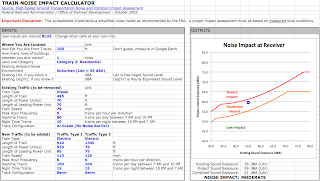 Some interesting findings, which one is free to experiment with in the spreadsheet:
Noise is one issue; its evil twin, ground-borne vibration, is a subject for another day. In the meantime, suggested improvements to the train noise calculator spreadsheet are most welcome.
Posted by Clem at 8:18 PM 30 comments:

There's a burning smell at Caltrain headquarters, from the smoldering tensions over high-speed rail on the peninsula. Caltrain CEO Mike Scanlon tries to triangulate a dicey situation with a statement to the public and a letter to his counterpart at the CHSRA. Let's review the state of play:
The surest sign of a thorny situation is that stakeholders keep calling for the project to be "done right," the touchstone platitude that is always trotted out when people start to get hot under the collar.

What about hitting a big red reset button at the Caltrain bunker in San Carlos?
While it can't be confirmed, the reset button is possibly located right under Mike Scanlon's desk.
Posted by Clem at 10:50 PM 35 comments: 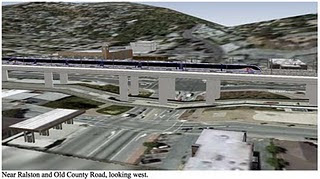 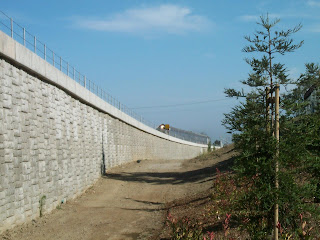 If Belmont disagrees with this outcome, if the city believes the viaduct is not better than a berm, and if this business about connectivity and mobility was all just a colossal misunderstanding, then the berm will simply be expanded to four tracks. The berm is a "fact on the ground" and its visual impact, once all is said, done and litigated, will not be counted against the high-speed rail project. That is the likely outcome if Belmont becomes any more strident in its demands for a tunnel.
Posted by Clem at 8:15 PM 32 comments:


This was the snapshot as of 2010.  For how this configuration might evolve over coming decades, please see Grade Separation: the Decadal View
Posted by Clem at 11:31 PM 20 comments: