This being Silicon Valley, future plans for Caltrain modernization are known as CalMod 2.0, the next big thing beyond the CalMod 1.0 improvements that are already under contract.

CalMod 2.0 is a list of future improvements worth about $750M that includes:
In the grand scheme of things, these aren't outrageous expenses ("only" another 38% over and above the $2B tab for CalMod 1.0), but they're not cheap, either. To meet capacity challenges in the short term, possibly concurrently with delivery of CalMod 1.0, perhaps some of these expenses can be moved up to realize the maximum bang for the buck as soon as 2021.

The EMU fleet for CalMod 1.0 consists of sixteen 6-car trains, with a reduced seating capacity of 558 that has caused much yammering amid the increasing load factors during peak commute hours. Even without a ridership bump from the "new and modern" effect, it is likely these trains will be packed from day one. Now is the time to start doing something about it.

The contract with Stadler includes an option for another 96 cars priced at $390M, a figure larded up to $440M in the CalMod 2.0 total presumably due to the usual procurement overheads. This figure is for 100% fleet replacement, with all the remaining diesel consists being retired. In the short term, only 1/3rd of the option cars would need to be exercised; this involves purchasing 32 cars or 2 extra cars for each of the sixteen EMU consists in the CalMod 1.0 order.

The per-train capacity will increase by well over 200 seats per train, back to a level that will mitigate peak hour crowding. However, 8-car EMUs will exceed the length of many of the existing platforms.

Platform extensions are relatively cheap to build, especially when you don't need to rebuild the entire length of station platforms as would be needed for level boarding. You can leave vertical circulation (stairs, ramps) and amenities (vending machines, lighting, benches, PA system, departure boards, etc.) alone and just tack on a short length of concrete, and perhaps move a pedestrian crossing. Caltrain excels at building platforms and has done so extensively, pouring some 5 linear miles of platforms over the last 18 years! 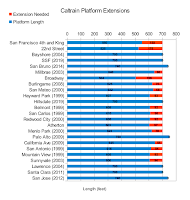 The length of Caltrain's existing platforms is documented in this schematic of California rail systems. To dock an 8-car EMU, platforms need to be extended to at least 700 feet. The necessary extension lengths are graphed at right; labels show the year of completion of each platform's construction.

The total amount of platform extension required to operate 8-car EMUs is approximately 3500 feet. This figure excludes Hillsdale and South San Francisco, both of which are already slated to be rebuilt to 700 feet. Each foot of platform costs about $7000 to build, on the basis of a typical $10M cost for two 700-foot platforms from past platform reconstruction projects. Therefore, the tab for extending all platforms to 700 feet (for the time being, at their current height of 8 inches) lies in the range of $25M.

The bottom line: another $175M or an extra 9% investment over CalMod 1.0 yields an extra 23% peak hour seated capacity for CalMod 1.1. It would be best to start planning for CalMod 1.1 now, and to turn CalMod 2.0 into the big level boarding project for the 2020s. In software parlance, the CalMod 1.1 patch should be applied immediately upon release of CalMod 1.0.
Posted by Clem at 9:03 PM 87 comments: