A System Requirement is a statement that identifies a necessary attribute, capability, characteristic, or quality of a system in order for it to have value and utility to a user. The entire engineering effort for the California high-speed rail system is prescribed by a long list of technical requirements, which taken together form the system specification. The requirements are prepared by the program management team at Parsons Brinckerhoff, and cover every detail down to the allowable shades of red for the train's tail lights.

The Palo Alto grassroots group CARRD recently made a public records request for this important material. Thanks to their persistence, the system requirements have now been made public:
The document that is likely to be of most interest is the 961-page "kitchen sink" which also contains background information on how each requirement was developed:
A large portion of the requirements is a hodgepodge of existing FRA regulatory requirements (Title 49 of the Code of Federal Regulations), AREMA (U.S. industry) recommended practices, and TSI (European Technical Standards for Interoperability) requirements. The European requirements are featured prominently because there is no existing regulatory framework for very high-speed rail in the United States, and California must blaze the regulatory trail.

As the high-speed rail system comes under ever-increasing scrutiny, these requirements will reveal where and why the CHSRA and its prime contractor (Parsons Brinckerhoff Quade & Douglas) might resist design suggestions made by communities along the rail corridor.
Posted by Clem at 8:55 PM 59 comments:

Another Wheel Gets Squeaky

With the recent release of the Supplemental Alternatives Analysis for the peninsula high-speed rail project, Redwood City has found itself with only one design alternative carried forward: an elevated four-track viaduct through downtown. This does not sit well with the mayor, who fired off a sternly worded letter to the Peninsula Rail Program, as reported in the Daily Post.

The letter points out that trenches are being carried forward only in those cities that have vigorously opposed the high-speed rail project, unlike Redwood City. The squeaky wheel seemingly gets the grease, and Redwood City feels left out.

The letter is noteworthy because Redwood City has not been at the forefront of HSR opposition so far. Councilwoman Rosanne Foust, a former mayor, is a strong supporter of high-speed rail and serves as CEO of SAMCEDA, the San Mateo County Economic Development Association. One of SAMCEDA's initiatives is the Alliance for Sustainable Transit and Jobs, a pro-HSR lobbying group.

Long-Standing Plans For An Elevated Station 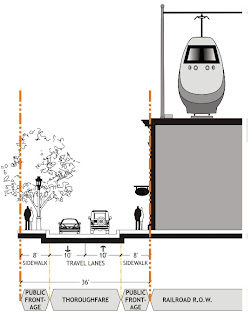 The cover page of Redwood City's controversial 2007 Downtown Precise Plan (set aside in 2009 after litigation) prominently featured the architectural rendering of a downtown elevated train station shown at the top, similar to what the HSR project now proposes. The plan stated that "the preference and assumption has been that the tracks will be elevated above grade, and a new train station will be centered on Depot Circle and the pedestrian connection to Sequoia Station and El Camino Real. This elevated railway will be carefully designed to become one of Downtown’s major assets." The draft New Downtown Precise Plan, published in March 2010, also assumes an elevated railway, as revealed in Book 2.3, which features the diagram of a railroad frontage lane shown at left.

Does that make Redwood City's new-found stance a bit disingenuous?
Posted by Clem at 10:32 AM 45 comments:

The Supplemental Alternatives Analysis for the peninsula corridor reveals some key engineering choices being made. That tunnels would be taken off the table was never in doubt: tunnels are nothing but trouble. The only tunnels now left are those that have a mountain. Well, almost... as we'll see below.
Clearly, there is a long way to go before context-sensitivity is achieved.
Posted by Clem at 4:10 PM 40 comments: 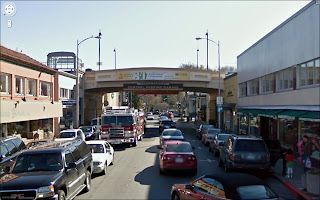 The elevated structure spans across several blocks of San Mateo, like a gash through the heart of downtown. Its 67-foot width casts vast shadows onto downtown shoppers, like a freeway overpass, although women and children seem to pass underneath without being attacked. The concrete structure, strangely free of graffiti, provides a full 16 feet of free clearance underneath it for trucks. Three stories up above, the side walls of the elevated bridges loom a full 25 feet over the street. To add insult to this injury, metallic poles tower another 18 feet above the structure, bringing its overall height to an incredible 43 feet!

If you know San Mateo, you might have guessed this describes the Central Parking Garage, a structure with presence, visual impact, and context-sensitivity resembling the elevated, four-track high-speed rail corridor that residents fear.
Posted by Clem at 9:07 PM 8 comments:

It's official: as noted on page 7 of the latest program management team monthly progress report, the selected track arrangement for the peninsula corridor, a key architectural decision with extensive ramifications for Caltrain operations, is slow-fast-fast-slow (SFFS). That means the express tracks will be located in the middle of the right of way, with Caltrain local tracks flanking them on each side. This arrangement is similar to the Northeast Corridor throughout New Jersey (photo at right by theahnman). From the report:

The good news is that the previously-favored, segregated SSFF or FFSS arrangements seem to be off the table. Those arrangements would have prevented the express overtakes that are the key to an effective Caltrain timetable, and would have forced wrong-way movements whenever any one of four tracks went out of service. Wrong-way movements vastly diminish track capacity and exacerbate cascading delays, where one late train makes a mess of the whole timetable--as any regular Caltrain rider knows all too well. So that's the good news. 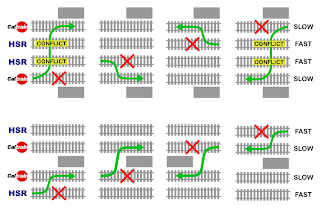 The bad news is that Caltrain will be stuck with side platforms. When a Caltrain track goes out of service, as it inevitably will, routing trains to the opposite platform will now require cutting across the HSR tracks, as shown in the diagram at left. No more central island platforms, which have undeniable operational advantages as well as simplified passenger access.

Given the choice between giving up island platforms (SFFS) or giving up overtakes (FFSS / SSFF), then SFFS wins by a mile because overtakes are key--but that's really a false choice, constrained by the menu of alternatives. The one alternative that is seemingly not being given due diligence is FSSF.

Their logic might go like this:
That's a perfectly logical chain of reasoning, but it is unfortunately based on a poorly conceived requirement that prohibits curved platforms. 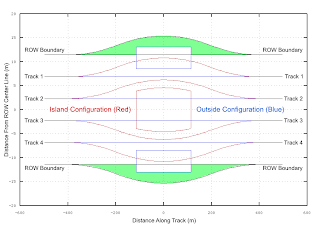 As discussed in Football Island, curved platforms allow the "wow" around the center island platform to be much more compact, using barely any more land than the side platform configuration. The diagram at right (do you see the football?) highlights the difference in green, amounting to about a half acre. With the exceedingly generous clearances likely to be used--the diagram shows a mere 75 feet of right of way width!--the difference would be even less. Now imagine a straight island platform, not shown in the diagram, where the green area would need to bulge out over a far greater length; the extra area would amount to the entire area of the platform, 30 x 750 feet or another half acre. That is indeed a waste of valuable land.

Fast-Slow-Slow-Fast isn't some far-fetched concept. It works in Sweden, and it would work here, far more efficiently and flexibly than a carbon copy of the Northeast Corridor. Why not give a careful second thought to curved platforms, unencumbered by rote compliance with ill-considered specification requirements?
Posted by Clem at 10:44 PM 96 comments: