Leaping Off the Fiscal Cliff 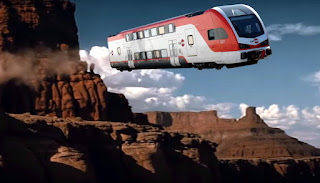 One phrase we're going to hear a lot in the next couple of years is "fiscal cliff," a sudden disequilibrium between Caltrain's revenues and expenses caused by the withdrawal of the temporary federal subsidies instituted during the pandemic. The slow recovery of ridership, which until 2019 had funded ~70% of the railroad's operating expenses, is opening a $50 million/year hole in Caltrain's budget outlook through the rest of this decade, according to a draft Short Range Transit Plan (SRTP) recently submitted to the Metropolitan Transportation Commission (MTC).

The SRTP is a process that every four years requires each agency to project hypothetical near-term fiscal scenarios under a standard set of assumptions. Most interesting in Caltrain's draft is that the agency threw in a bonus scenario besides the prescribed hypothetical scenarios: the "Electrified Service scenario" a.k.a. Caltrain's actual plan.

This "Electrified Service scenario" makes zero effort to tackle operating costs, hiding behind a theory that Caltrain is inherently a high-fixed-cost operation, meaning that costs are not highly variable with the level of train service provided. All efforts are instead directed towards securing "funding opportunities," an approach that could very well succeed, as transit funding effectively grows on trees in California, no matter how inefficiently expended. Here are the scary numbers:

What if we blew up some long-held assumptions and attacked this fiscal cliff from the cost side?

Since time immemorial, the peninsula corridor electrification project has been sold as only a partial step towards electrification, anticipating that only 75% of the service would become electric with 25% remaining diesel, primarily to serve the non-electrified portion of the corridor south of San Jose. Operating a mixed fleet of diesel and electric trains blows up operating and maintenance costs, since many functions have to be duplicated (training, tools, spare parts, etc.). Revenue miles per vehicle are projected to drop by 10% when electrified service starts, which is a sure sign that your fleet is too big and isn't working hard enough.

How can Caltrain possibly operate with only the 19 EMU sets that will be delivered by 2024?

One certainly can't use all 19 in revenue service. Set one aside for maintenance downtime (grade crossing collisions will continue), and keep another two in reserve for timetable protection, essentially hot spares parked at each end of the line, crewed and ready to enter service at moment's notice to plug any delays during the peaks. That leaves just 16 sets to support a peak service level of six trains per hour per direction, a firm condition of Caltrain's funding agreement with the federal government.

However, if you change the goals of a timetable to maximize equipment utilization, it turns out that it can be pulled off. Good service is just a side effect. Here is a new all-electric timetable that makes those shiny EMUs really earn their keep:

This is admittedly a slightly sporty timetable in that it requires aggressive 10-minute turns and a European level of padding of 7%, less than Caltrain is accustomed to dawdling with. The resulting risk of delay is mitigated by "protect" trains at each end of the line. There is also margin in the long station dwells (45 seconds) and the leisurely acceleration times built into the timetable, with power capped at only 2/3rds of the EMU's nominal rating.

The savings from disposing of the entire diesel fleet would be significant, and their residual resale value would only help Caltrain's balance sheet. The newer Baby Bullet fleet will have reached 20 years of revenue service, the minimum required by the FTA for federal funding assistance, so no penalties will arise from their early disposal. although its disposal would incur a small penalty reimbursement to the FTA since the equipment will not have reached its 25-year minimum useful life (according to FTA Circular 5010-1E, page IV-26.)

One hitch: the overhead wire doesn't extend to Gilroy.

Gilroy service is a big weight on Caltrain's operational balance sheet because the ridership and revenue is minuscule compared to the high fixed cost of maintaining diesel service. Before the pandemic, ridership south of San Jose city limits (Blossom Hill) made up a negligible 0.8% of Caltrain's weekday ridership. South of Tamien was hardly better, at 1.2%. Until electrification is extended down to Blossom Hill (as it should be), it makes better sense to transfer this infrequent diesel service to an extended Capitol Corridor, with a direct cross-platform transfer to Caltrain in San Jose.

This can rid Caltrain of the entire diesel fleet, which is currently planned to remain at least 9 locomotives and 79 (!!) cars. It also frees Caltrain from another headache, having to comply with near-term diesel emissions mandates under consideration by the California Air Resources Board.

Caltrain has too many assistant conductors. Assistant conductors are very expensive, costing about $15 million/year by FY25, about 1/3 of the operating deficit. Note this figure does not include conductors, only their assistants. The new EMUs relieve some of their duties, such as announcing station stops. The new fleet also has automatic passenger counters, giving precise real-time insights into passenger loads. While today's conductor staffing levels are determined by a formula from the number of cars, the formula should instead be revised to use recent passenger loads. This would ensure that all trains have a consistent staff/passenger ratio and that conductors have fair work loads.

With six electric trains per peak hour and at least 20-minute service at all stations, much better than is provided today, the conditions could be created for a robust recovery of ridership. Good service drives ridership, but if Caltrain is allowed to execute their mixed-fleet "Electrified Service scenario," as planned, we will barely achieve any service improvement as costs continue to spiral upwards.

Applying these cost-saving measures, Caltrain could close their operating deficit and erase any "fiscal cliff" without expending any energy to capture ever more "funding opportunities" to support entrenched and inefficient operating practices. The fleet does not need to grow, nor does the headcount. The operating culture needs to change: it's not enough to buy Swiss trains; you need to actually run them like the Swiss.