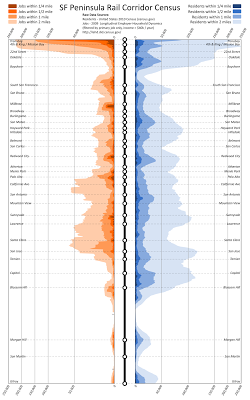 The diagram at right shows where people live and work along the entire length of the rail corridor from San Francisco to Gilroy, as extracted from government census population and jobs data sets.  The diagram is also available as a PDF.

By simple observation of the features of the census population and job distributions along the peninsula corridor, it is possible to infer the desirable features of train service patterns that will maximize commute ridership.
Putting all this together, what would a service pattern look like that is tailored to the census distributions, to maximize commuter ridership?  First, it would not look like today's Baby Bullet, which severely under-serves numerous stops.  It would also look very different from Caltrain's latest planning fad, the "peak-period skip-stop zone express," used as the basis for all operational simulations in the blended service analyses published to date.  It would look like this, with distances drawn to scale:

This service pattern is also well-suited to future blended HSR service: a southbound high-speed train and a closely-following Silicon Valley Express can overtake and catch up (respectively) with a San Mateo local by using a four-track mid-line overtake facility constructed from San Mateo to Redwood City.  Because the local turns back at Redwood City, it does not impede traffic in Santa Clara County.

The time has come to fundamentally rethink peninsula rail service patterns.  Caltrain's "peak-period skip-stop zone express" is almost certainly not the best solution for meeting future demand; a much wider range of options must be considered.
Posted by Clem at 7:57 PM