The Exploding Cost of Grade Separations

Recently, the San Mateo County Transportation Authority prepared a grade separation program update, discussing past and future projects. What immediately jumps out of this document, and others published by Caltrain, is the exploding cost of grade separation projects. The project budgets are shooting through the roof, vastly outpacing inflation. Typical of this cost explosion is the Broadway grade separation in Burlingame, which will grade-separate a single intersection at the eye-watering cost of $327 million.

With the SMCTA slides giving cost data for past and current projects along the Caltrain corridor, it is fairly straightforward to assemble a simple model of grade separation project component costs. All figures are inflated to 2020 dollars before fitting, and we break out unit quantities for each project of the following project components: fully elevated rail over road crossings, split (partially elevated) rail over road crossings, trenched road under rail crossings, pedestrian tunnels, stations, and the number of miles of corridor where the track elevation was changed. With all those quantities broken out for each project, we can fit a simple model that estimates the unit costs by (empirically, not rigorously) minimizing a least-squares fitting residual. The main result of this model is that projects from the mid-1990s through today consistently cost about $36 million per crossing, with not too much variation:

That brings us back to Broadway in Burlingame, which according to this model should cost only a third of the price tag of $327 million. That's right, even including two pedestrian tunnels and a new station, the entire Broadway project should cost no more than $100 million. This factor-of-three discrepancy raises some serious questions about how this project is being engineered, and whether it should even proceed in its current form. One could counter that the cost model presented here is too simplistic and doesn't reflect the unique local conditions of this project, but the model does okay with predicting the cost of every past grade separation project over the last 30 years. Is this a case of over-fitting the data, or have the engineers behind this project simply lost their senses?

With the most traffic of all grade crossings on the peninsula corridor and train-on-car collisions occurring on average once a year, the Broadway crossing is at the top of the state's priority list for grade separation, and we all know that you can't put a price on safety. That makes the Broadway grade separation project ripe for name-your-price taxpayer extortion.

Insane Costs are Baked in to the Caltrain Business Plan

A Caltrain business plan presentation from 2019 attempted to quantify the expense of partially grade-separating the corridor for each contemplated service scenario. The cost modeling for this was even cruder than the simple spreadsheet model described above: the costs for each project were either copied and pasted directly from each city's estimates (of wildly varying quality), or a standard grade separation unit cost of $255 - $355 million per crossing was adopted. This value is up to TEN TIMES the value estimated from past and present grade separation projects, and flies directly in the face of common sense. Despite the coarseness of this spreadsheet costing exercise, the resulting grade separation costs (on the order of ten billion dollars regardless of service scenario) were passed along into the regional Plan Bay Area 2050 exercise.

Why have costs exploded for a project like Broadway, which has proceeded far enough into detailed design to accurately estimate construction cost?

Utility relocation. Whenever you dig, surprises happen where utilities buried underground are found elsewhere than expected. The more and deeper you dig, the more surprises you will find. Every new discovery delays or even stops construction work, running up costs. Almost every digging project undertaken by Caltrain runs into this situation. Just in the last couple of years: in South San Francisco, construction of a grade-separated pedestrian access tunnel was delayed for 17 months, at an additional cost of $10 million (and still counting!) due to utility relocation issues. In San Mateo, the 25th Avenue grade separation project, where several new crossings were dug, was delayed by over 500 days due to negotiations with Union Pacific over the relocation of fiber optic cables. Pacific Gas & Electric also had to be paid to move a high pressure gas line. The budget for utility relocation almost tripled, from $12 million to $32 million, not counting the cost of construction delays. Meanwhile, corridor-wide, Caltrain's electrification program (while not a grade separation) is continually digging up their own brand new train control fiber optic cables, which were buried in places that don't match what the contractor said they did. This is causing many months of delay to foundation installation. The matter is now tied up in court, as one of several smoldering side sagas in the big bonfire of litigation over the CBOSS project, still building up to a climactic jury trial in 2022.

Vertical curves made for freight trains. Changing the vertical profile of the tracks, whether up or down, is subject to design constraints on the radius of vertical curves, or how quickly (and over what distance) the slope of the tracks is allowed to change. You might think this issue primarily affects faster passenger trains, but amazingly, the biggest culprit is heavy freight. Freight cars maintained to the bare-minimum standards practiced in the United States can derail at the slightest provocation, so industry track design standards are set extremely conservatively. The maximum vertical acceleration allowable for freight cars is 0.1 ft/s^2, six times less than for passenger trains. At equivalent speeds, the grade change (for example from level track to a one percent slope) must then take place over a distance six times longer than for passenger trains. If you wanted to design the vertical profile of a grade separation to the most aggressive vertical radii and shortest structure lengths allowable for passenger trains, the freight trains would have to be slowed down to 1/sqrt(6) of the passenger train speed to stay under their six times lower vertical acceleration limit. On the peninsula corridor, where we design for 110 mph passenger trains, short grade separations require that the freight trains can't go any faster than 45 mph. Unfortunately, new grade separations such as Broadway in Burlingame or downtown Redwood City are being engineered for 60 mph freight speed, which makes all the vertical curves (and bridges, embankments, trenches, etc.) almost 80% longer than they need to be for 110 mph passenger trains. 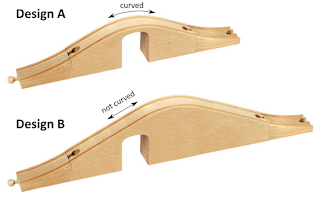 Vertical curves that can't overlap bridge spans. Recent preliminary design drawings, such as for the Redwood City grade separations, reveal a new design constraint has been applied that does not appear in older Caltrain engineering standards. The vertical alignments are configured such that wherever the track crosses over a bridge span (as for a grade separation) there is no vertical curvature. To understand how wasteful and silly this is, ask any engineer--never mind, ask any kid: is a train bridge supposed to look like design A or design B, where this  constraint has been applied so no vertical curvature exists where the tracks pass above the under-crossing? Anyone can see this design rule will blow up structure height, length, cubic yards of concrete, and of course cost. And yet, that's what we see in all the profile drawings.

Paint-by-Numbers Structure Depth. There are well-worn preliminary engineering rules for how thick a bridge deck needs to be relative to the loads it must support and the width of a span. Blind application of these rules during preliminary engineering, when the vertical track profile is often decided, results in bridge decks that are comically deep, as measured from soffit (bottom surface of the bridge) to top-of-rail. These massive bridges result in a much higher track profile, needlessly increasing the length, height, visual impact, and cost of grade separation projects. Bridge structural forms exist that minimize structure depth, and it is often possible to shorten spans by adding support columns.

How to build affordable grade separations

Here are some golden rules for designing affordable grade separations. These are rules that are clearly not being followed for Broadway, or for the Menlo Park plans, or for the downtown Redwood City plans, and directly contribute to stratospheric cost estimates for these projects.

Another important consideration, in view of the large number of grade separation projects that will be required to advance the decadal process of grade separating the peninsula rail corridor, is to standardize designs. There ought to be a small set of bridge designs that can be repeatedly adapted to each situation, using standard prefabricated structural elements. Not every project needs to be a special snowflake.