Redwood City Grade Seps: We Must Do Better

The first preliminary engineering plans for the downtown Redwood City grade separations are out. This isn't your average grade separation: it underpins the most important new piece of rail corridor infrastructure that will enable future Caltrain service to be much better than it is today. Redwood City will become the main overtaking location for Caltrain, with a cross-platform transfer between local and express trains at a new four-track station. We had previously looked at Redwood City issues and laid out the design values that will make Redwood City a high-functioning station.

There are four grade separation alternatives on offer, as described in the overview video:

If you're going to be driving a car, the good news is that the designers have done a fantastic job with the car infrastructure, with an A+ on road and intersection design. Unfortunately, this is a grade separation first and a train station second, almost as an afterthought. It should be a train station first. To understand why, let's look 20 years ahead.

Better Service for Many More People

In 2040, which sounds futuristic but is relatively soon, rail service in Redwood City is far better than was ever imagined in the depths of the pandemic of 2020. Here's what is happening:

Focusing on the track layout, the common thread of these four improvements to rail service is the quadruple tracks through downtown Redwood City, connecting the new four track station to the four track segment at Redwood Junction / Highway 84 built at the turn of the century. These quadruple tracks enable parallel train movements into and out of the Redwood City station, making optimal use of the 80-foot width of the rail right of way. This four track layout brings us back to the downtown grade separation project being planned twenty years before, namely now.

None of the Redwood City grade separation alternatives allow four tracks all the way through downtown. What's worse, the two-track layouts of all four alternatives are wasteful of the scarce and valuable downtown right of way, making no allowance for adding these critically important station approach tracks later. These tracks are required for two very important operational reasons:

We mentioned earlier that service to Fair Oaks could serve many people and generate new fare revenue in exchange for zero additional crew labor and equipment cost. How is this magic even possible? Let's compare two operating scenarios:

Scenario A. In Caltrain's service vision, express and local trains overtake each other every 15 minutes at the downtown Redwood City station, which will have four platform tracks to allow convenient cross-platform transfers. Unfortunately, with two-track approach bottlenecks from the north and south, trains must enter and leave Redwood City sequentially. That means the local arrives first, waits three minutes for the express to catch up and arrive behind it, then waits another minute for the express dwell time, then waits another couple of minutes for the express to leave and pull far enough ahead. Only after six or seven minutes, even if everything is running perfectly on time, can the local leave Redwood City. Sitting still at a red signal is operational poison, wasting passenger time (all the more so because the perception of delay time is magnified more than 2x by immobility) and driving up crew labor costs ($/passenger-mile). Meanwhile, there is no rail service for Fair Oaks residents, and a long gap in Caltrain coverage between Redwood City and Menlo Park.

Scenario B. The express overtake occurs on a passing section with one or more stations served only by the local. The deceleration time, dwell time, and acceleration time associated with that extra local station stop allow the express to gain on the local while the local is being useful and providing service, instead of just sitting around for an interminable dwell at Redwood City. In the southbound direction, the local arrives in Redwood City, waits three minutes for the express to arrive, exchanges passengers, and leaves the station at the same time as the express. The two trains run side-by-side until the local stops at Fair Oaks. By the time it's ready to go again a couple of minutes later, the express is long gone and no additional waiting is required. The overtake took the same overall time (six or seven minutes) as Scenario A, but used the time productively to provide local service every 15 minutes at a new station serving 35,000 people within a 1-mile radius, at zero additional crew labor or equipment cost.

Here's what the track layouts look like, with station distances roughly to scale, comparing the current condition with Scenario A (planned grade separation configuration) and Scenario B (with Fair Oaks station): 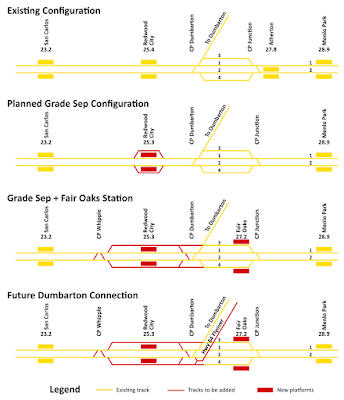 Bonus points are awarded for leaving sufficient room to run a fifth grade-separated track from the southbound tracks to the Dumbarton corridor, flying over Highway 84, as shown in the last panel. This allows seamless merging of the two corridors, without the two streams of rail traffic fouling each other on the way to and from downtown Redwood City. The right time to plan for this is now, not after we pour concrete in the wrong place, even if the funds aren't yet available and there isn't yet a viable Dumbarton project.
Here's what the new Fair Oaks station might look like, near milepost 27. It's about 100 feet wide in an area where the corridor is only 80 feet wide, so it will require taking nine properties along William Avenue. While taking residential properties in a less advantaged neighborhood of unincorporated San Mateo County is never desirable, this must be weighed with the wider benefits to the 35,000 residents of North Fair Oaks and other neighborhoods within a one-mile radius. A narrow slice (~10 feet) of land would be required to be taken from backyards along the opposite side, to make room for the southbound platform. The site has good pedestrian and bus access via Fifth Avenue, and a new pedestrian underpass would connect Berkshire Avenue across the rail corridor, improving neighborhood connectivity. The new Fair Oaks station is very low hanging fruit that can make Caltrain serve more people more efficiently from day one of the new service vision.

The marginal cost of building the grade separations with the additional tracks now is small relative to doing it later, so why would we delay such an important operational improvement or waste money re-doing it twice?

Not allowing for quadruple approach tracks is the fatal flaw of the downtown Redwood City grade separation project. All the alternatives feature two-track bottlenecks that fail to adequately support Caltrain's service vision and impair the future Dumbarton rail corridor service, which is especially concerning because Caltrain and the San Mateo County Transportation Authority seem to have directly participated in the design.

Here are some other comments on the various alternatives:

The Redwood City grade separation is about much more than just grade separating roads to make traffic flow freely. Like any project on the rail corridor, it needs to be planned and built not only such that future improvements to rail service aren't made more difficult or impractical, but to start putting in the hooks for those improvements now. The marginal costs aren't zero, but they're so much less than fixing it later. Caltrain has a deplorable track record with future-proofing grade separation designs: the San Bruno grade separation and station, just recently completed in 2014, is already officially planned to be partially demolished for the high-speed rail project to straighten out a curve that could have been built correctly in the original design (reference HSR San Francisco - San Jose project DEIR Volume 3, Alternative A, Book A1 plan and profile drawings, sheet 7).
The same kinds of silly mistakes are now starting to be made in Redwood City, with an efficient layout to facilitate express overtakes and Dumbarton service being fumbled by oblivious consultants who excel at the road details and don't seem to appreciate the rail details. When they've got a hammer, the whole world looks like a thumb.
Posted by Clem at 8:35 PM