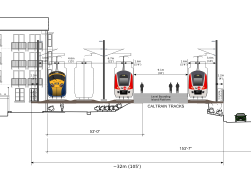 In San Carlos, plans are afoot to build a so-called "Transit Village" on a strip of vacant land adjacent to the train station. The land, owned by Caltrain and SamTrans, the county transit agency, was acquired for construction of the grade-separated berm (see Focus on San Carlos).

The Draft EIR for the Transit Village project is currently open for public comment.

The plans are remarkable for their amazing lack of coordination with the high-speed rail project. The Transit Village FAQ dismisses the issue in one fell swoop:

A recent article in the San Mateo Daily Journal, highlighting concerns about the project, failed to mention the high-speed rail issue even once.

Meanwhile, HNTB, the engineering firm in charge of the peninsula rail corridor, is actively considering several design alternatives that would widen the corridor to well over 100 feet at the San Carlos station. One of these alternatives is to run a pair of HSR tracks west of the existing station, right where the Transit Village buildings are planned. Perhaps this is a game of who gets there first, but no matter which way you slice it, four tracks plus platforms are going to exceed 100 feet in width.

The project EIR includes several site sections, an example of which is reproduced above superimposed with one of the HSR configurations currently under consideration. (Click for the complete diagram, drawn to scale, without any utility easements--i.e. as narrow as possible). If the railroad right of way is not expanded eastward into Old County Road and the adjoining East San Carlos neighborhood, then the required rail corridor will quite literally overlap with the planned buildings as shown in the figure. Short of an actual overlap, even close proximity would be unacceptable from an interior noise standpoint, and would preclude emergency vehicle access to the rear of the buildings. The inescapable conclusion:

The project will very much be affected by HSR, quite possibly up to eminent domain and demolition.

Anyone who says otherwise is trying to sell you a Transit Village. Who will pay for this egregious lack of foresight? Probably the suckers who buy the residential units, and the suckers who pay taxes to fund needlessly expensive right-of-way acquisition. Remember, this little soap opera will take place on land that is currently owned by Caltrain and SamTrans!

Why pull another San Mateo? Have Caltrain and SamTrans learned nothing about sacrificing valuable railroad right-of-way on the altar of cities' pet projects? Is somebody in Sacramento going to wake up and knock some heads together? Or is it on us to foot the bill after the mess is made?
Posted by Clem at 8:04 PM