The Effect Of Heavy Freight 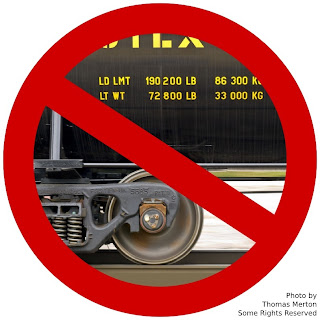 Heavy freight trains operate nightly on the Caltrain corridor. "Heavy freight" is characterized by very high axle loads (up to 30,000 kg or 65,000 lb) and very high mass per unit length (up to 7,500 kg/m or 5,000 lb/ft). Today, they are not much of a nuisance and few people notice them, but what will happen when the high speed rail project is built on the peninsula? HSR will bring a lot of changes, but some of them will be attributable to freight more than high speed rail. This is an attempt to tease out the specific community impacts of heavy freight trains.

The Caltrain corridor has more than 40 grade crossings, every one of which will be eliminated. Grade crossings can be eliminated either by closing them permanently, or by building a grade separation overpass or underpass, similar to the many grade separations that already dot the corridor. Usually, the easiest way to build a grade separation is to keep the railroad tracks at ground level and detour the road over or under the tracks. In some cases, though, detouring the road is not practical because of nearby residential or business frontage, or major roads and intersections.

Getting Trains to Climb

You might think that 125 mph (200 km/h) passenger trains would need very gentle grades and a vertical track profile that is as flat as possible--but you'd be wrong! What determines train safety and comfort is vertical curve radius (at that speed, a minimum of 6 miles or 10 km), and not the steepness of the grade. Powerful high speed passenger trains and modern EMU commuter trains planned by Caltrain can easily climb grades that are very steep by railroad standards, like a whopping 3% (i.e. 3 feet up for every 100 feet along the track). It's the heavy freight trains that have difficulty with those grades, because freight locomotives will start spinning their wheels if they attempt to drag a massive train up such a steep incline. That's why heavy freight trains are typically limited to grades of about 1% (i.e. 1 foot up for every 100 feet along the track). Grades any steeper than that require additional locomotives, shorter trains, and cost more to operate. 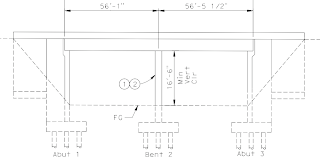 When a grade separation is built over a road that cannot be lowered, the railroad tracks must be raised about 20 feet above the level of the road. That includes the clearance for road vehicles, plus the thickness of the bridge deck, plus the height of the rails, as shown in the diagram at right. (Trains go on the top, cars and trucks on the bottom.)

To get the rails up to that height, long sloping approaches are needed on either side of the crossing, forming an elongated hump. If you were to stand close enough to such a hump structure, you would see a retaining wall. 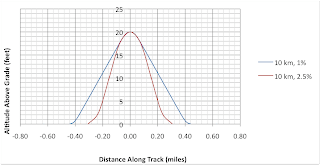 What will heavy freight trains do to the design of a typical grade separation rail overpass? They make the approach ramps much longer and greatly increase the area of the retaining wall that neighbors would have in their back yard, as shown in the figure at left, with the vertical scale greatly exaggerated. Walls block sight lines, are themselves ugly to look at, reduce property values, and can attract graffiti and neighborhood blight.

The other possible option is to sink the rails under the road. When a grade separation is built under a road that cannot be raised, the railroad tracks must be sunk over 30 feet below the level of the road. That includes clearance for trains, high voltage overhead electrification, and the bridge deck. The resulting trench must be dug even deeper than rail level to account for the foundation of the structure. 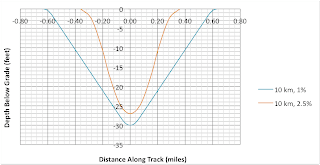 Once again, to get the rails down into a trench, long sloping approaches are needed on either side of the crossing, forming an elongated sagging profile. Adding a twist, heavy freight trains can be up to three feet taller than regular trains, which requires digging the trench three feet deeper than would otherwise be needed, as shown in the figure at left. On a structure that's 75 feet wide and well over a mile long, that adds up to a lot of extra dirt to remove.

Exact values may vary, but the relative percentages will again be very close.

Heavy freight trains double the amount of excavation needed for a railroad trench underpass. That may be fine with neighbors because the trains would stay even more out of sight, but since a trench is more expensive, an elevated solution will be preferred. That's right: where a wall might not have been required, heavy freight trains could tilt the balance in favor of an elevated wall. The Churchill Avenue crossing in Palo Alto is a great example where this trade-off may occur to the detriment of the neighborhood.

Heavy and long freight trains perform poorly on a track profile that rises and falls across each road crossing like a roller-coaster. Such undulating profiles complicate train handling and can cause hazardous slack action. That's why the grade separations in Belmont and San Carlos are built on a continuous elevated embankment that stretches for several miles, simplifying the handling of trains using the primitive manually operated air brake.

In contrast, modern, powerful electric passenger trains with advanced automatic train control systems can glide over these ups and downs without causing their passengers any discomfort. In the manner of an airplane's autopilot, the train's control software automatically adjusts throttle and braking in concert with the vertical profile of the track, which is stored in an on-board database. This capability allows considerably more rise and fall in the vertical profile, which minimizes the extent of elevated structures and thus lessens impact on communities.

On sections of track elevated over roads, or open viaducts to allow community access to both sides of the tracks, trains run on what is effectively a bridge. Bridge design depends on the load that will be carried. A good proxy for this load is the linear mass density of the heaviest train, or how much the train weighs per unit of length.

While these values are approximate and do vary quite a bit, heavy freight trains can be two to four times as heavy as a passenger train! Throw in the usual factors of safety, and you don't have to be a civil engineer to guess what that does to a bridge design:
These are not characteristics that you might call neighborhood-friendly. Heavy freight trains will make the design of graceful elevated structures nearly impossible. (For a representative attempt, visit San Carlos.)

The interaction of wheel and rail is an arcane subject that mixes black art with cutting-edge research. It is the stuff of academic journals, so we won't venture out of our depth here. Wheel and rail profiles are typically engineered as a system, in order to achieve a balance of cost, wear, fatigue, and noise characteristics. In a nutshell, as quoted from a journal article, "Lines that handle high-speed passenger trains during the day and freight traffic at night represent the most challenging conditions under which to properly maintain rail and track."

Loaded to 30,000 kg per axle (65,000 lb), freight cars can operate with wheel flat spots that measure up to 2 inches in length. The resulting thump-thump-thump is not only loud, but it wreaks havoc on tracks that are carefully aligned for passenger trains.

On the peninsula, passenger trains will always outnumber freight trains, and by a vast margin. Is heavy freight worth the extra track maintenance cost, likely to be borne by the taxpayer? Is it worth the additional noise, especially if so much more track will be elevated? 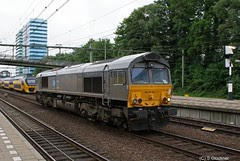 While it may initially read like it, the foregoing is not a manifesto against freight. Rail is an environmentally friendly way to move freight on the peninsula, and removes trucks from highway 101. The problem isn't freight per se, but heavy freight. It is possible to operate freight trains with much lighter loads and more compact loading profiles. In other countries, such trains are routinely and safely mixed in with high speed passenger train traffic. American manufacturers like GM and GE export hundreds of light freight locomotives to those countries, so it isn't like this would require any development effort. You can pick up the phone today and order yourself a JT42CWRM (photo at right by CargoFighter), made right here in the U.S.A., and hook it up with freight cars that maybe aren't loaded quite all the way to the brim to keep the weight down. This would be more expensive to operate, but may be worth the enormous savings in capital cost (big structures, more concrete), and especially--most importantly--improved urban design and quality of life in the communities along the Caltrain corridor.

There are many ideas about how high speed rail on the peninsula should be "Done Right". For the reasons enumerated above, doing it right means heavy freight should be banished from the peninsula. The benefits are probably not worth the additional cost to communities. Such a ban would probably enjoy little support from the Union Pacific Railroad, Caltrain, and even the California High Speed Rail Authority and its coterie of engineering consultants, whose U.S.-centric cultural inertia may exceed that of even the heaviest freight train. Are they capable of thinking outside the boxcar?
Posted by Clem at 8:28 PM