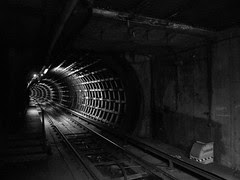 Among the many interesting things that happened in Berkeley in the 1960s, one of them happens to be relevant to high speed rail on the peninsula: the BART tunnel saga. (tunnel photo by Paul Wicks). The parallels with peninsula communities who desire high speed rail and Caltrain to disappear underground are striking, and indeed oft-mentioned by the California High Speed Rail Authority during community outreach meetings. "You want a tunnel," they say? "Sure, no problem, if you can pay for it just like Berkeley did."

The story goes that Berkeley simply ponied up the cash and presto, BART was put underground. In reality, it was an agonizingly complicated and acrimonious process that pitted the city against BART and its engineering consultants in a David vs. Goliath fight. The side of Goliath was led by Parsons Brinckerhoff, the same firm now heading up the California high speed rail project. There is much to learn for peninsula cities whose official preference is that high speed rail be put in a tunnel, a growing list of which includes Burlingame, San Mateo, Atherton, Menlo Park and Palo Alto.

The Berkeley tunnel saga was chronicled by historian and political scientist Stephen Zwerling, who published Mass Transit and the Politics of Technology in 1974 (ISBN 0-275-08390-0). This book is no longer in print and has become quite rare. A few examples are available at public libraries in San Jose, Palo Alto, Redwood City, San Mateo and San Francisco. Some sections were converted to electronic format here. The Berkeley story is contained in a limited reproduction of Chapter 3--a must-read for all tunnel proponents and opponents.

If one were to crudely apply the lessons from BART vs. Berkeley in the 1960s to CHSRA vs. peninsula communities in the 2000s, the key takeaway would be this: if peninsula cities wanted tunnels, they would need to take matters of design, cost estimation and financing into their own hands now because the CHSRA would not help them--and could indeed actively undermine them while pretending to help. The Authority would know that tunnels are expensive, and that ceding even an inch of tunnel to one community could trigger demands from many other communities up and down the peninsula and even state-wide, weighing heavily on the financial viability of the project.

This is all hypothetical, of course; the CHSRA in the 2000s may not compare to the fascinating tale of BART in the 1960s. Then again, the overall dynamics of the situation are too similar to ignore. Would expecting a different outcome make one a fool?
Posted by Clem at 12:10 PM