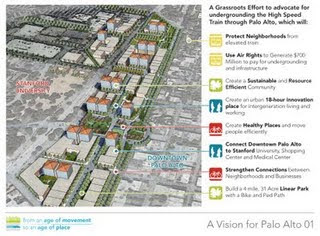 While the city of Palo Alto has of late developed a certain ambivalence towards high speed rail, some residents are taking the planning into their own hands. Taking for granted that high speed rail will come through Palo Alto, a group of civic leaders and architects is elaborating some design proposals that may shape the California High Speed Rail Authority's ongoing analysis of alternatives.

The group proposes tunneling the train tracks through the entire 4 mile (6 km) length of Palo Alto, as first described in a Palo Alto Weekly cover story published before the 2008 election. This idea, which would liberate more than 40 acres of land currently owned and occupied by the railroad, has since been fleshed out into an urban design concept entitled Innovation Place. A presentation of Innovation Place earned the group a 2009 urban design award from the American Institute of Architecture California Council. As its creators note, Innovation Place is a collection of ideas rather than a specific project proposal.

The crown jewel of Innovation Place is a complete transformation of the University Avenue station area, as envisioned in the team's graphic above. High speed rail or not, this area of Palo Alto is in dire need of a redesign; today, access between three important zones of activity (the University Avenue shopping district, Stanford University, and the Stanford Shopping Center) is a circuitous and dysfunctional jumble that is both unpleasant and time consuming to navigate, whether by foot, bike, car or bus. Neighboring areas just a few hundred feet apart feel miles away from each other.

The remainder of the Innovation Place proposal consists of a 31-acre linear park adjoining Alma Street, featuring a bike and pedestrian path and uniting the two halves of Palo Alto formerly separated by the train tracks. The additional cost of putting the tracks underground would be financed by selling $700 million worth of air rights for development.

The feasibility of the Innovation Place concept hinges on the financing for tunnel construction. Will air rights for residential and commercial development really be worth $700 million? Will Palo Alto's famously difficult development approvals process allow the construction of 660 homes and 814,000 sq ft of retail and the elimination of El Camino Park, Palo Alto's oldest public park? Will the incremental cost of tunnels (as compared to simpler track alignments) cost as little as $700 million?

These questions remain unanswered, and the technical challenges of building a cavernous four-track high-speed tunnel might not bode well for the cost. On simple grounds of environmental justice, the CHSRA has refused to contribute its own funding for any tunnels that benefit a local community rather than provide added transportation functionality. Instead, it encourages cities to pay for such tunneling costs, as Berkeley did with BART in the 1960s. That scenario might require Palo Alto to pay for the project by taxing itself through an initiative passed at the polls. For such an initiative to have even the slightest chance of passing, the benefits need to be distributed throughout Palo Alto, and not just be focused on the University Avenue area. That is why, out of political necessity, the linear park along the entire length of Palo Alto is a non-negotiable component of the concept. A partial tunnel just won't do.

The city of Palo Alto recently set aside $70,000, in large part for hiring an engineering consultant to provide independent review of tunneling plans. The consultant is Hatch Mott MacDonald, a mega-firm with extensive tunneling experience (and one of the key players in San Francisco's Downtown Extension project) that has previously provided advice to the backers of the Innovation Place concept. While such a consulting arrangement may be independent of the CHSRA, the firm does have an incentive to show financial feasibility of a tunnel because it may well end up bidding on its construction--a conflict of interest that should be mitigated to obtain the most objective evaluation of tunneling options.

Does It All Hang Together?

If Innovation Place has a weakness, it is that the concept really consists of two separable elements: the University Avenue redevelopment, and the tunnel / linear park. If Palo Alto were to become a high speed rail stop, the rare opportunity to reconfigure and redevelop the station area would present itself regardless of whether or not the tracks ran in tunnels. Most of the Innovation Place presentation is devoted to this intelligent urban re-design of the University Avenue area, which has great merit on its own.

On the other hand, the tunnel and linear park need the University Avenue development in order to make even the slightest bit of sense; otherwise, what's left is a billion-dollar public park, an idea that obviously won't get very far.

One of the key features of Innovation Place is an underground station at University Avenue. However, it's worth considering an even wider range of options: this area could just as well be redeveloped without any tunnels at all. Streets on either side of the tracks could be reconnected using regular grade separations. Lytton Street could be connected to the bus depot, El Camino and Quarry Road, improving bus, shuttle and taxicab connections at the train station.

The station platforms could even be elevated with a large pedestrian and transit plaza underneath, in the manner of Amsterdam's spectacular Bijlmer Arena station, a project that has won several architectural awards. Bijlmer was designed by Grimshaw Architects and completed in 2007 for 130 million euros. (Photo by tataAnne; view more photos.) While it is about double the size that Palo Alto would ever need, its design philosophy is light years beyond the unpleasant and unsafe walk through the 1940s University Avenue underpass:

Every aspect of the design process was informed by the need to civilise the viaducts and to create a pleasant and safe ground level public space. To avoid a dark 100 m long tunnel, the concrete structures were spaced apart. Each 20 m span was supported at each end on just one column via an integrated cantilevered saddle. Arrays of columns were then aligned on axis with the boulevard to maximize visual connectivity from east to west. However, the most important decision concerned the roof design in general and its soffit treatment in particular. It is the modulation of this surface, its ribbons of roof glazing and its acoustically absorbent Oregon pine surfaces that convey civility from the perspective of the boulevard below. [From the Grimshaw website]

If one thing is sure, there is no shortage of architectural possibilities--with or without tunnels.

Looking Ahead, Not Back

Palo Alto is unleashing its creative talents on how best to weave high speed rail into the fabric of the city. The city will be hosting design "teach-in" on September 12th, sponsored by the Peninsula Cities Consortium. On October 3rd and 4th, the creators of Innovation Place will host a high speed rail workshop geared towards developing solutions and tangible design products for use in the CHSRA's analysis of alternatives, a key document that will be published by the Authority by the end of this year. Legislators, civic leaders, Caltrain and the CHSRA will participate in both events.

Whatever quibbles one may have with Innovation Place, it represents a forward-looking vision for Palo Alto and an embrace of high speed rail, rather than a desperate clinging to the past, and for that alone, it is refreshing.

Full disclosure: this blogger may participate in these events.
Posted by Clem at 9:40 PM