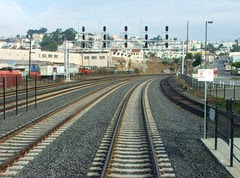 The peninsula corridor was laid out in the mid 19th and early 20th centuries, for train speeds of that period. It is the oldest passenger line west of the Mississippi. Needless to say, rail technology has progressed enormously in the last 100 years. The California High Speed Rail Authority is now planning to run trains on the peninsula at a top speed of about 125 mph. Sounds great, but what about all the curves? (Bayshore curve photo by Michael Patrick)

To allow HSR operation at 125 mph, just how wide does a curve need to be? This is an elementary calculation of railway engineering, and is determined by safety and passenger comfort. Without going into details, speed can be increased in a curve by banking the track into the turn, like a turning airplane or a freeway exit ramp. The outside rail can be canted or super-elevated a maximum of 7 inches (178 mm) higher than the inside rail. Trains can go even a bit faster than the speed that balances this banking, causing passengers to feel a sideways push to the outside of the curve. The technical term for this is cant deficiency, and under current FRA regulations it is limited to 3 inches. Within those limits (7 inches cant + 3 inches cant deficiency), physics dictates the following curve radii:

The recommended radius is preferred, in the absence of trackside constraints such as houses and roads, to keep passengers comfortable and reduce wear and tear on the trains and the track. Wherever curve clearances are constrained (i.e. pretty much anywhere on the peninsula), the minimum radius becomes the quantity of interest.

The Cost of Slowing Down

Slowing down from 125 mph to take a curve, and accelerating back up to 125 mph costs several seconds of travel time, compared to an uninterrupted run at 125 mph. It's just a few seconds, but if every curve eats a few seconds out of the schedule, pretty soon HSR starts losing its "high speed." So exactly how many seconds are too many? Maybe the answer lies in the cost of a second. If you assume:
Then each second of delay costs about $1 million of lost time to HSR passengers, and could be worth about $1 million in construction costs to remediate. That does not include the ancillary benefit to Caltrain Baby Bullet passengers. One can take issue with the exact assumptions and accounting methods, but the point of this exercise is to gain a very rough order of magnitude understanding for the cost of a second: on the order of a $1 million.

Using a typical deceleration / acceleration rate of 0.5 m/s^2, the cost of temporarily slowing down for a typical curve from a cruise speed of 125 mph goes as the square of the speed difference:


The square relationship means that it's not necessary to straighten curves all the way up to 125 mph. Arbitrarily setting our threshold of diminishing returns at 5 seconds of penalty, 110 mph curves can be considered "good enough" unless they can be straightened to 125 mph within the existing right of way, essentially for free. The reconstruction of any curve below 110 mph should be weighed against the dollar cost of time lost.

While this author is not versed in the fine art of estimating construction costs, we now have enough information to at least prioritize the worst curves where something should be done, short of deciding which ones are actually cost-effective to rebuild.

Existing Curves on the Peninsula

All major sub-125 mph curves in the Caltrain corridor from San Francisco to San Jose are shown in the chart below. Milepost is plotted along the bottom, and the curve's maximum speed is plotted on the vertical axis. The maximum speed is derived from the curve radius by assuming the aforementioned 10 inches of equivalent cant, except for reverse curves where different constraints apply. (Note, these speeds are not possible today; the maximum cant on Caltrain is 5 inches to accommodate freight trains, and the signaling system allows only 79 mph.) 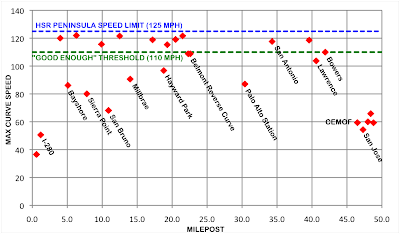 Click for Larger View. First, there are quite a few curves that interfere with a 125 mph speed limit, as indicated by the blue dotted line.
Leaving aside these "impossible" curves and the "good enough" curves, we can examine the remaining curves and construct a list of the worst curves for HSR on the peninsula.

Here's a Google map, although it is much more accurate and instructive to view the KML file directly in Google Earth.

#10 (Honorable Mention) CEMOF Double Reverse Curve - Milepost 46.5 - While the CHSRA plans a tunnel under this area, you really have to wonder what Caltrain was thinking when they dropped this turd on the approach to San Jose. That's why it gets an honorable mention.

#9 Belmont - San Carlos Reverse Curve - Milepost 22.4 - While we're adding another two tracks here, the incremental cost of straightening this curve to 125 mph ought to be near zero, since it can probably be done within the existing ROW. Savings: 10 seconds.

#7 Bowers Curve (see curve detail map) - Milepost 41.9 - Already OK for nearly 110 mph, but could use as much flattening as practical because of the proximity of Lawrence curve.

#6 Lawrence Curve (see curve detail map) - Milepost 40.6 - This shallow 100 mph curve can easily be straightened all the way up to 125 mph by purchasing a narrow strip of office parking lot (which Sunnyvale has plans to redevelop anyway). This is low-hanging fruit, well worth the 10 second savings.

#4 Millbrae Curve (see curve detail map) - Milepost 13.9 - An unfortunate consequence of the last Quentin Kopp extravaganza, the BART airport extension. Challenge: BART tail tracks occupy the inside of this 90 mph curve. BART would have to give up one of three tail tracks to straighten for 100 - 110 mph operation. This ought to be feasible: two of the tail tracks were built in anticipation of a BART extension south of Millbrae, which no longer makes sense. Savings: about 15 seconds.

#3 Palo Alto Station - Milepost 30.1 - Already discussed in Focus on Palo Alto. While the existing curve radii are gentle, the problem at Palo Alto is a double reverse curve, which requires long spiral easements to reverse the curvature and prevents the speeds you might deduce from the radius alone. The southbound track is good for just under 90 mph. Challenge: reconfigure the Alma St. overpass; on the plus side, JPB already owns all the required land. Savings: about 25 seconds. A must-do, regardless of whether Palo Alto becomes an HSR station.

#2 Bayshore Curve (see curve detail map) - Milepost 5.1 - Just north of the Bayshore station at the mouth of Tunnel #4, this curve is a piece of cake to straighten to 125 mph, provided Bayshore station is redone. This will probably happen anyway to make room for the approaches to the planned new tunnel bores on each side of the existing tunnel. The new tunnel bores could even have curved ends. Savings: about 20 seconds. Cost of new platforms: $10M tops. Low hanging fruit, just waiting to be picked!

#1 Worst Curve: San Bruno Curve (see curve detail map) - Milepost 10.9 - previously discussed in the San Bruno article. This curve, currently 65 mph, should be straightened to 110 mph minimum. Savings: a whopping 40 seconds. Challenges: well-advanced plans by Caltrain for a new station, locking in the existing curvature; eminent domain for ~$5M worth of houses on the inside of the curve; six I-380 viaduct pillars would need to be moved. If this curve can be fixed even for $30-40M, JUST DO IT!

The CHSRA and its engineering contractors should not resign themselves to the existing curvature of the peninsula corridor. A rigorous study of curve remediation should be undertaken before the new track alignments are finalized.

It was brought to my attention that the CHSRA published in its considerable (if un-navigable) body of work a series of run simulations. This is what the pros do, instead of the back-of-the-envelope calculations detailed here. A sample San Jose to San Francisco run is detailed below. The train used in the simulation is a Siemens ICE 3. It does not stop in San Jose in this particular example. Total time from San Jose (running start) to San Francisco is a few seconds short of 30 minutes (1793 seconds, to be precise)

This simulation reveals a couple of interesting assumptions on the part of the CHSRA's analysts:
While these assumptions are self-consistent and do not violate any laws of physics, they are somewhat optimistic. This is another reason to straighten San Bruno curve: then you could do SF to SJ in 30 minutes with margin.
Posted by Clem at 9:20 PM