Judging a Train By Its Nose 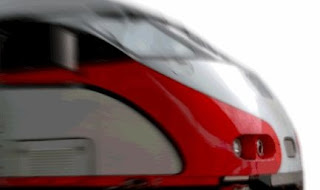 One of the recurring themes emerging from public comments about HSR on the peninsula, at scoping meetings or on community bulletin boards, is the notion that HSR on the peninsula merely duplicates existing Caltrain service at astronomical expense and disruption to communities. The reasoning goes like this: why bother with HSR running at "half speed" on the peninsula if passengers can just catch a Baby Bullet in San Jose that whisks them into San Francisco? We've already got a bullet, so why do we need another one? If HSR is only running at "half speed" why not use the existing tracks? Those are good questions.

One thing is certain, Caltrain has scored a marketing home run with their Baby Bullet brand, borrowing the aura of high speed rail and pointy-nosed aesthetics to convey an image of speed and efficiency. Unfortunately, there are a couple of problems with confusing the Baby and its namesake.

"We already have a bullet. We don't need another one!"

Baby Bullets look sleek, and they impress when they blast by, horn blaring. However, they are nowhere near as fast on average as the proposed high speed trains. Timings from San Jose to San Francisco:
HSR at "half speed" is still nearly twice as fast as the Baby Bullet. Suppose HSR were terminated in San Jose, and that passengers transferred to Caltrain. Accounting for transfer time in San Jose, the effective speed of the Baby Bullet ride would approach three times slower than a single-seat HSR peninsula ride. The overall trip from LA to SF would increase from 2:38 to 3:15, an increase of about one quarter. If we compromise that much on the peninsula, why even bother with 220 mph in the central valley? Indeed why bother with high speed rail at all?

Ridership is very sensitive to total trip times and changing trains. Every second counts. That is the reason for terminating HSR in San Francisco, which has a large catchment area of potential riders.

"If HSR is running at half speed, let them just use the existing two tracks!"

Mixing trains with different average speeds on the same track reduces track capacity, measured in units of trains per hour (tph). A slow train must be given plenty of time to clear the tracks ahead of a fast train that follows; otherwise, the fast train will catch up to the slow train and get stuck behind it. While modern signaling systems allow 15 tph when speeds are homogeneous, today Caltrain can only manage 5 tph at rush hour because Baby Bullets and locals operate at very different speeds. Add HSR to the mix, and what little track capacity we have would collapse.

More tracks are needed along much of the peninsula to allow trains with vastly different speeds to overtake each other, thus freeing track capacity. This ultimately has benefits for local Caltrain service as well: with Baby Bullets allowed to operate on the new HSR tracks, local track capacity will increase, enabling more rush hour service to under-served stops like California Ave or Belmont or South San Francisco.

Never judge a book by its cover. Likewise, never judge a train by its pointy nose.
Posted by Clem at 10:02 PM