HNTB Corporation is a large civil engineering firm that has a key role in the overhaul of the peninsula corridor. HNTB designs bridges, highways, airports, railways, stadiums, and basically any complex infrastructure that eventually involves pouring fair amounts of concrete. They have about 2700 employees in 60 offices nationwide, including a key office in Oakland and a satellite office in San Jose.

HNTB was the principal designer of the BART extension to SFO and Millbrae; they were the brains behind all the track, tunnels, aerial structures, and the South San Francisco and San Bruno stations. The actual construction was done by other firms teamed with HNTB. The BART project was politically spearheaded by Quentin Kopp, who is today the chairman of the California High Speed Rail Authority. On election night 2008, just as Measure 1A returns were being tallied, Kopp was sipping martinis with HNTB management and other firms involved in the high speed rail project. Peter Gertler, HNTB's national transit director (in charge of all things rail) and his staff are even reported to have canvassed for passage of the bond measure.

HNTB is no stranger to Caltrain: they designed the CEMOF maintenance facility in San Jose, which features an elegant reverse curve that is sure to cause yet another interesting engineering headache for high speed rail.

HNTB is now engineering the peninsula section of the HSR project, under a contract awarded by the California High Speed Rail Authority in November 2008. They will design all aspects of HSR on the peninsula, starting with basic track alignments. Their latest status report can be found here. Once the preliminary design is completed to the "30 percent" level in mid-2012, the CHSRA will put the detailed design and construction of the peninsula corridor out for bid. HNTB is certain to team with construction firms to bid on the next phase, but it is not guaranteed to win. 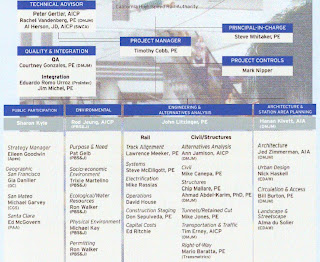 Here are some key names that you may see popping up, and who were in attendance at the scoping meetings. An organization chart is also shown at right, from the January status update.
HNTB is teaming with other firms for this design work, including DMJM, Transmetrics, Prointec (a Spanish firm with 20 years of HSR experience), among others. It's nice to see some European involvement to make sure the peninsula is done right.
Posted by Clem at 1:45 PM