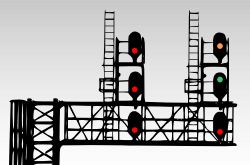 Trains on the peninsula today rely on light signals placed next to the tracks that indicate whether it is safe to proceed. In order to safely operate a train, the crew must view and interpret these signals, a process that is inherently vulnerable to human error. While error-prevention protocols are in place to minimize the likelihood of such errors, they can still happen, with deadly consequences.

Positive Train Control (PTC), a means to prevent accidents due to train crew errors, has been a priority of the National Transportation Safety Board since the 1970s. The recent Chatsworth accident, where a train engineer missed a red signal because he was texting on his cell phone, moved the federal government to mandate the installation of PTC on all passenger railroads and freight main lines by December 31st, 2015.

Positive Train Control is achieved by hardware and software that continually monitors and enforces the train crew's compliance with movement authority (the permission to occupy a portion of track for a certain distance, time, or speed), and intervenes in case of human error. PTC consists of three major functions:
PTC is not just hardware and software; it is a function. PTC is not new; there are many existing train control systems in operation around the world that implement some or all functions of PTC. PTC is not foreign; it already exists on several passenger railroads in the United States (most notably on Amtrak's Northeast Corridor) and is common in urban rail systems such as BART.

The Federal Railroad Administration has issued a Notice of Proposed Rule Making detailing the regulatory requirements with which all PTC systems must comply. Besides describing the history and context of the new rules, the NPRM specifically states that "wherever possible, FRA has attempted to refrain as much as possible from developing technical or design standards, or even requiring implementation of particular PTC technologies that may prevent technological innovation or the development of alternative means to achieve the statutorily defined PTC functions." Appropriately, PTC is being defined as a function, not a product.

Efforts to implement PTC products have been afoot for years. The freight railroads are now chafing at the scope and cost of the unfunded PTC mandate, calling into question whether it can be met by 2015. Five years is a short time to standardize a technology and to deploy it on a grand scale--over 30,000 locomotives and 100,000 miles of track for just the five largest freight railroads.

The Universe Beyond PTC

As narrowly defined by the FRA, Positive Train Control by itself does not suffice to run a high-speed passenger railroad. Achieving a safe flow of rail traffic requires myriad systems that generate and communicate movement authorities to each train, perform track clear detection (when a portion of track is free to be entered by a train), dispatch and optimize traffic flows, monitor system status and health, and even drive the trains in the smoothest and most energy-efficient way. These systems are known by an alphabet soup of acronyms that are often specific to signalling practice, railroad culture, or specific products in various countries. Those who wish to dig deeper might read the book Railway Operation and Control by Joern Pachl, for an accessible and culturally comprehensive overview of quite a complex subject.

Today, Caltrain uses a widespread technology known as Centralized Traffic Control (CTC). A dispatching office in San Jose operates the peninsula corridor by remote control, through relay-based logic that safely sets all switches and signals. The train crew is responsible for observing signals and speed limits, and may communicate with the dispatcher by voice radio. This system is ill-suited to running high traffic densities at high speeds; therefore, an improved signal system is considered a top priority in the Caltrain 2025 plan (now being merged into the Peninsula Rail Program). That system is known internally as CBOSS.

CBOSS, or Communications-Based Overlay Signal System, implements PTC functions and many additional features. Its key benefits are stated to be:
CBOSS is an overlay system, in that it makes few changes to the underlying vital infrastructure that controls trains on the peninsula, namely the signals, interlockings and Centralized Traffic Control used to generate and communicate movement authorities, and the track circuits used for track clear detection and grade crossing protection. One of the key design drivers for CBOSS was to avoid altering or replacing this infrastructure, gradually built up in the last fifteen years within Caltrain's limited budget.

Like many modern train control systems, CBOSS consists of train-borne equipment, wayside and track equipment, a dedicated radio communication network, and an interface to the dispatching center. There are plans to reuse as much hardware and software as possible from the emerging PTC systems being developed by and for the freight railroads.

In November 2008, after CBOSS specifications were well underway, high-speed rail suddenly became a realistic prospect rather than a distant fantasy. Sharing the peninsula corridor with HSR has enormous implications for CBOSS. Consider the changes:
HSR brings one undeniable advantage: financial resources that dwarf anything that Caltrain could muster by itself. Thanks to HSR, CBOSS figures prominently in the short-term funding strategy for the peninsula corridor, with $230 million requested in the MTC's Peninsula Corridor Investment Strategy. The contract to build CBOSS is due out to tender in November 2009. 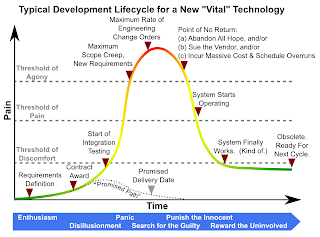 Developing, integrating, testing and deploying safety-critical software and hardware is no picnic. It is neither easy, quick, nor cheap, especially when the technology is new. The recent history of train control system development, even here in the Bay Area, is littered with projects that were delivered years late, millions over budget, or even not at all. Without fail, new train control systems follow the development profile shown in the cartoon at right.
These examples illustrate the enormous--and systematically under-appreciated--risk that is inherent in developing and deploying sophisticated new safety-critical embedded systems.

One can reasonably infer that it is exceedingly unlikely that Caltrain, but a small speck in the universe of passenger rail, can single-handedly develop something as technically complex and refined as CBOSS within any reasonable schedule or budget--much less if it hitches its wagon to freight PTC. The HSR project raises the stakes even higher than the FRA PTC deadline, because CBOSS must first work reliably to enable the construction of HSR infrastructure while maintaining Caltrain operations. A failure would be compounded--imagine Caltrain's CBOSS program delays cascading to the statewide HSR system, resulting in idle tracks with no trains. Despite the best intentions and deep expertise of the development team, the chances of a fiasco are alarmingly high.

Of course, this nightmare scenario is not a foregone conclusion, although one would hope that the mere prospect would be considered one of the highest risks to the Peninsula Rail Program, whether on technical performance, cost, or schedule.

The CBOSS project has ambitions that reach beyond Caltrain. A report states that "Caltrain has noted with some focus that if desired or required, CBOSS is capable of being readily extended, not only to adjacent properties, but broadly within the industry to ensure solid and sustained support within the industry." There's even hopeful talk of CBOSS being considered for HSR. Since CBOSS wants to play in the big leagues, it’s only appropriate to compare it to the current state of the art, namely ERTMS (the European Railway Traffic Management System, often referred to by its component system ETCS, the European Train Control System). Why ERTMS, despite the development failures cited above?

In short, that was then, this is now.

ERTMS is now over the development "hump" and is gradually maturing to the point of becoming a worldwide standard in passenger rail applications. Despite its European origins, it is now being deployed in many countries outside of Europe; it's hard not to notice Australia, China, India, Saudi Arabia, South Korea or Taiwan jumping on the ERTMS bandwagon.

The following comparison points out key differences between CBOSS and ERTMS:

The Case Against ERTMS

Most arguments against the suitability of ERTMS for the peninsula corridor, advanced by a key CBOSS developer, fall into three broad categories.
Most of these arguments boil down to pounding the pulpit. News flash: Caltrain is an insignificant, two-track back-and-forth operation with sparse traffic, no complex junctions, and a tiny fleet. It will remain so for the foreseeable future.

The Case For ERTMS

Suppose that Caltrain's primary business is to carry passengers, and not to undertake major new technology development projects with a price tag more than twice annual revenue.

Suppose that a CBOSS development failure is actually not an option, since it would snarl the entire Peninsula Rail Program.

Suppose that there are many program risks that threaten the smooth execution of the Peninsula Rail Program, and that CBOSS development risk borrows more trouble than it's worth when demonstrated solutions exist.

Suppose that Caltrain developing a new train control technology for HSR amounts (at best) to the tail wagging the dog, or (at worst) to the future need for redundant on-board equipment on every single high-speed train in California.

Suppose that being locked into a single vendor does not promote vigorous competition and healthy long-term viability of your supplier base.

Suppose that freight PTC might not become all that it's cracked up to be, especially not by the 2015 deadline of the government's unfunded mandate, forcing Caltrain to continue operating obsolete, unreliable diesel trains long past their expiration date.

Suppose that Caltrain is capable of the same zeal and pragmatism in pursuing FCC spectrum for GSM-R (or any other minor regulatory obstacle) as they display when running the red tape to import off-the-shelf European EMU trains that are "non-compliant" with FRA regulations.

If these suppositions sound remotely reasonable, then the Peninsula Rail Program should take the bold and visionary step of adopting ERTMS--warts and all. ERTMS would mitigate development risk, guarantee future compatibility with HSR, and avoid dependency on a single vendor.

If these suppositions are false, then maybe it's time to invent a better mouse trap than ERTMS. Best of luck with that.
Posted by Clem at 10:08 PM