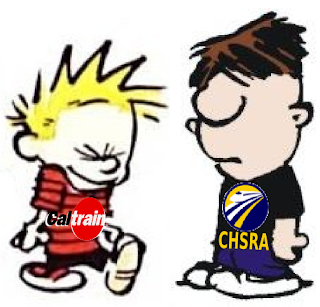 Back in April, the CHSRA and the Peninsula Corridor JPB (also known as Caltrain) entered into a Memorandum of Understanding that laid out a sparse outline for collaboration between the two agencies on the peninsula HSR project. This MOU is not a binding contract, since it can be canceled by either party upon 30 days notice, but it provides an increasingly detailed framework for agreement--so long as it lasts. A new MOU amendment, approved by the CHSRA on October 1st and likely to come before the PCJPB in November, is just as interesting to read as the newly released preliminary alternatives analysis that has drawn most of the media's attention. 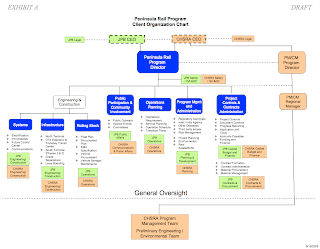 The joint project, known as the Peninsula Rail Program, is structured as shown in the organizational chart at right.

The PRP director, Caltrain's Bob Doty, reports 50 - 50 to the respective chief executive officers, Mike Scanlon at Caltrain and Mehdi Morshed at CHSRA. A horizontal relationship is envisioned between Doty and Tony Daniels, the CHSRA's statewide program manager. That places Dom Spaethling, the CHSRA's regional manager, one tier below alongside the PRP discipline managers. The HNTB team that is currently doing most of the preliminary engineering and environmental work, under Tim Cobb and John Litzinger, reports to Spaethling and not to the PRP director.

The dual reporting structure, embedded deep into the hierarchy, will be challenging to manage whenever the differing needs of high-speed rail and Caltrain come into opposition, as they surely will. The 15 or so people represented by blue boxes will have their work cut out for them when the two agencies don't see eye to eye. While the MOU does not indicate how labor costs are burdened with overhead, the PRP director is listed on page 13 at $547,413 per year, with an average of $392,331 per year for PRP personnel. When the going gets tough, they will have to prove that their mettle at least matches their financial compensation. [UPDATE 10/5: it turns out that the labor figures are about 3.5x the salary paid to the employees. For example, the director makes about $170k per year.]

Under the PRP director, the program is organized into five major functions, each of which is assigned FTE (full-time equivalent) personnel as listed below. Each functional area is further described in pp. 7-11 of the amended MOU.
It is refreshing to see operations planning staffed to nearly the same level as engineering. Operations planning can establish early on how best to provide efficient and integrated service on the peninsula, which drives all the ancillary questions of engineering such as the choice of rolling stock or the number of tracks required in each location. Operations should drive engineering, and not the other way around--as is sadly and often the case throughout the history of Bay Area rail transportation projects. Work smarter, not harder.

Clash Of The Standards?

Until an operator for CHSRA has been identified, PCJPB will provide engineering standards developed by and for the Peninsula corridor, which must be compatible with Caltrain and HSR.

Caltrain's extensive library of engineering standards will continue to rule on the peninsula, despite a growing collection of closely held technical standards, memoranda and directive drawings produced by Parsons Brinckerhoff to ensure statewide technical compatibility and interoperability among all sections of the high-speed rail system.

Caltrain will need to evolve its standards to attempt a complicated feat, without precedent in the United States: the gradual transition from legacy diesel trains to the modern, lightweight electric trains commonly seen in Europe and Japan. Do they have what it takes?
Posted by Clem at 11:07 PM