With all the focus on high speed rail, it might be useful to review and recalibrate expectations regarding ridership on the peninsula rail corridor. Fire up your calculators: the conclusion may surprise you.

According to a recent electrification update, Caltrain is now expecting 72029 weekday boardings by 2035, up from about 40000 today. That pencils out to an extremely conservative annual growth rate of about 2.3%; for comparison, ridership has grown at an annual rate of 8% over the last five years. The number of weekday trains is assumed to grow from 90 (formerly 98) to just 114.

Based on those unambitious projections, and assuming 35000 weekend boardings in 2035 (Saturday and Sunday, in similar proportion to today), the total annual ridership adds up to 20.0 million boardings. Turning back the clock from 2035 to 2030 using the average growth rate, we get 17.9 million annual boardings in 2030. 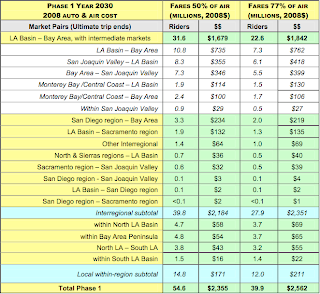 The CHSRA's latest ridership projections were published as part of their 2008 Business Plan. The plan assumes (see page 5) that by the year 2030, a whopping 222 trains per weekday will serve San Francisco. The ridership is estimated based on two different fare levels, at 50% and 77% of air fares. Tallying all the regional ridership totals from the table on page 6 (reproduced at right) that include the Bay Area as origin and/or destination, the total year 2030 ridership is 28.6 million yearly boardings at 50% of air fare, falling to 20.2 million boardings at 77% of air fare.

Not all of these riders will go to peninsula destinations. Those starting or ending their trip in the Bay Area's most populous city, San Jose, should not be counted as peninsula corridor rail passengers. Suppose that 13% of trips that begin or end in the Bay Area do so at San Jose, a portion commensurate with San Jose's fraction of the total Bay Area population. That leaves the remaining 87% to travel for some distance along the peninsula, amounting to 25.5 million riders (at 50% of air fare), or 18.1 million riders (at 77% of air fare).

HSR will be operated to generate maximum yield, just like an airline striving to maximize the difference between revenue and cost, in order to help finance the expansion of the system. Since every ridership scenario shows that revenue increases with fares, even as ridership drops, we can reasonably eliminate the 50% of air fare scenario as a fantasy that no profit-seeking rail operator would ever consider.

So, using the CHSRA's own ridership figures at the 77% of air fare level, annual peninsula HSR ridership (counting only those riders whose trip includes the peninsula) comes to about 18 million. 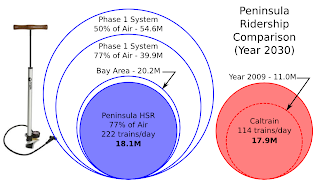 The ridership estimates, when taken at face value, show that Caltrain and HSR will each have about 18 million annual riders by the year 2030 (as revealed by squinting at the figure at right). Factoring in the conservatism of Caltrain's assumptions and the optimism of the HSR assumptions, one can reasonably conclude:

Caltrain ridership is likely to outnumber HSR ridership on the peninsula for decades to come.

Who would have thought? And dare we hope this will be taken into consideration as the peninsula rail corridor is remodeled?
Posted by Clem at 9:39 PM

Email ThisBlogThis!Share to TwitterShare to FacebookShare to Pinterest
Labels: ridership