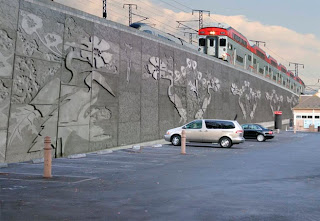 As described in a City of Palo Alto press release, the cities hope that the Authority and Caltrain will apply an approach to decision making and design known as Context Sensitive Solutions.

CSS is a formal process developed over the last decade to involve all stakeholders throughout the planning and design of transportation projects, to ensure that the outcome meets the transportation need while preserving the community context in which the project is built. The CSS website contains a full description of goals, principles, case studies, etc. while Wikipedia provides a short summary. CSS can even be reduced to a pithy definition, presumably arrived at using some of the very same concensus-building tools:

Context sensitive solutions (CSS) is a collaborative, interdisciplinary approach that involves all stakeholders in providing a transportation facility that fits its setting. It is an approach that leads to preserving and enhancing scenic, aesthetic, historic, community, and environmental resources, while improving or maintaining safety, mobility, and infrastructure conditions.

The push for CSS is rooted in a legitimate concern from peninsula communities that the rail corridor will be built up without sufficient regard for its community context.

Kumbaya or the Real Deal?

The CHSRA/Caltrain bulletin uses the words Context Sensitive Design Principles, stopping short of using the Solutions keyword. Semantics? Perhaps, but if the CSS process were being applied to the peninsula HSR project, many community design workshops would already have taken place.

It's getting a little late for that, with the CHSRA preparing to reveal the results of months of design work performed entirely out of the public eye by Parsons Brinckerhoff and HNTB--and then only because NEPA and CEQA laws require all the design alternatives to be fully and publicly documented. While the Authority has collected a large amount of community input through its environmental scoping process, all the exchange has so far gone only one way: into the black box. "Thank you for your comment card."

Key design decisions tend to made early, based on top-level requirements specifications and drawings. A list of these appeared in the CHSRA's July 2009 Program Summary Report, starting on page 54. These documents are very important because they establish the framework under which all design work is proceeding. When that work is made public, questioning a design will be ineffective unless we know what the requirements are that produced it.

CSS principles call for design collaboration and concensus building, early and often. Under CSS, the public would have open access to all the requirement specifications and directive drawings that drive the design. At numerous public meetings, however, the CHSRA and its engineering consultants have deferred, side-stepped or dismissed any specific design questions with a cursory "we don't know that yet." They may be concerned about showing bias, compromising the environmental review process, or inflaming community passions, but such coyness is definitely not among the qualities of Context Sensitive Design.

The Eye of the Beholder

CSS is most commonly applied to highway projects, where context-sensitivity can mean more than a few ornamental embellishments: sometimes, it's about slowing down traffic to make a road mesh consistently with the neighborhood. Applying that model to HSR, CSS can become a blank slate onto which community stakeholders may project their desire for fewer trains, tunnels, or slower speeds.

The CHSRA, meanwhile, intends to implement a service plan based on ridership studies and assumptions about service speed and frequency, painstakingly developed over the last several years. The plan calls for traffic of over 200 weekday trains running between San Jose and San Francisco in as little as 30 minutes, by the year 2030. The need for grade separations, the number of tracks, and the speed of the trains are all direct consequences of this plan, and the Authority's battle lines will be drawn around it. From their point of view, "Context Sensitive Design" might mean ornamental retaining walls (as shown above with a spoof on a famous visualization circulated by HSR opponents), fancy overhead electrification supports, or anything else that doesn't compromise the plan.

Without compromising the plan, the traffic-calming angle is an interesting one. Slowing down the trains through residential neighborhoods is an idea worth studying; the time penalty from slowing to 100 mph from 125 mph for a stretch of about 5 miles (40 seconds) is roughly equivalent to the time gained from straightening out a single curve in San Bruno. Of course, this raises some questions of environmental justice: why should some folks in San Bruno lose their homes so other folks in Atherton or Palo Alto can enjoy lessened noise and vibration?

When it comes to CSS, actions will speak louder than words.
Posted by Clem at 11:11 PM