Only 2.7 miles of the peninsula rail corridor fall within the city limits of Brisbane (population 3597), of which the majority was widened to four tracks in the early 2000s to enable overtaking for Caltrain's Baby Bullet express service. The four tracks already in place might at first suggest that the impact of high speed rail on Brisbane would be relatively minor, especially since Brisbane does not have a single grade crossing and will therefore not require any controversial grade separations. Unfortunately for Brisbane, HSR is likely to be much more than just tracks passing through town. 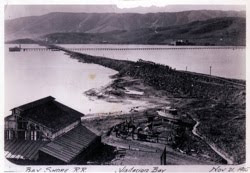 The existing alignment of the Caltrain tracks was established by the Southern Pacific railroad's Bayshore Cutoff, a series of trestles and tunnels built at the turn of the 20th century to provide direct rail access to San Francisco (shown under construction in the 1905 photo at right, looking south). The marshes between the tracks and the original shoreline were filled in with rubble from the 1906 earthquake, and became known as the Baylands (see overview map, as well as track maps for mileposts 5 and 6). In its heyday, this area served as a massive railroad yard, complete with engine roundhouse. The tracks were shut down in 1982, and all that remains of the yard is a vast expanse of soil contaminated with lead and oil, forming the western portion of the 650-acre site now known as the Brisbane Baylands.

Most of the stakeholders in this process seem oblivious to the possible implications of the high speed rail project for Brisbane. The HSR scoping comments submitted by the City of Brisbane never even mention two very important words: maintenance facility.

The high speed rail system requires train maintenance and storage facilities in the vicinity of its major terminals. This topic came to light during the California High Speed Rail Authority's August 2009 meeting, when the board chairman noted that the requirements for such HSR maintenance facilities were not generally understood by the public, and asked for memoranda describing these facilities to be released.

90 to 108 acres is a lot of land, a strip over 1000 ft wide by nearly a mile long. The CHSRA additionally desires the access tracks to such facility to be about 4000 ft long, to allow trains to leave the main corridor at about 100 mph and enter the maintenance facility without forcing other trains to slow down. This concept is similar to a freeway exit ramp, and would likely be grade-separated from the main line through a suitable arrangement of flyovers. The total length of the facility would be over two miles. 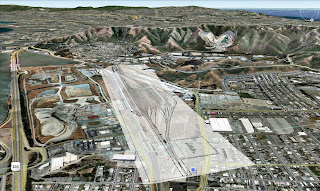 Ideally, again according to the CHSRA memoranda, the facility should be located preferably within 1.5 miles of the San Francisco terminal, desirably within 3 miles, and exceptionally further than 3 miles. The good news for Brisbane is that it is further than 6 miles from the Transbay Transit Center in San Francisco, seemingly outside the acceptable range of this criterion. The bad news is that there are no 100-acre parcels of flat, open land available within those 6 miles.

While the CHSRA's memoranda never mention Brisbane by name, the location of the San Francisco Terminal Storage / Maintenance Facility (TSMF) is nearly certain to be:

Curiously enough, a February 2009 visit to the Brisbane Chamber of Commerce by the CHSRA's Quentin Kopp does not seem to have touched upon all the implications of high speed rail for Brisbane, since it was reported as having been "well received." Let's see how it goes after Brisbane wakes up-- see the realistically-scaled overlay of the CHSRA's yard plan shown above, or better yet, see for yourself in Google Earth.

NOTE: This post will be updated continuously, as warranted by additional information or new events relating to Brisbane.
Posted by Clem at 10:44 PM