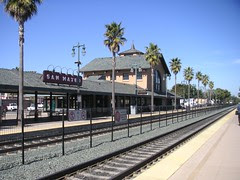 The city of San Mateo was incorporated in 1894, 30 years after the railroad began operating. Along the 4.5 miles of rail through the city, there are today three Caltrain stations, two of which (Hillsdale and San Mateo) are Baby Bullet stops. The three stations in San Mateo generate greater combined Caltrain ridership than San Jose, a city with ten times San Mateo's population.

San Mateo is among the most treacherous areas on the peninsula to expand to four tracks for high speed rail because the existing Caltrain tracks run through dense residential neighborhoods and downtown blocks where the available right of way width is significantly less than 100 feet. The city is a "ground zero" of future grade separations: it is home to one-fifth of the grade crossings on the entire peninsula rail corridor (9 out of 46). To improve safety and traffic circulation, the city has long had plans to grade-separate all of its rail crossings; high speed rail will only hasten this process. The San Mateo County Transportation Authority has been carrying out a series of preliminary grade separation footprint studies in support of these plans.

San Mateo finalized a Rail Corridor Transit-Oriented Development Plan in April 2008, covering the vicinity of the Hillsdale and Hayward Park Caltrain stations and including the re-development of the Bay Meadows racetrack site.

The San Mateo Caltrain station was rebuilt in 1999-2000 to alleviate auto traffic congestion. The new $11 million station with underground parking (photo above by ibison4) replaced a sparse older station a few blocks to the south. Every time a train stopped at the old station's center boarding platform between 3rd and 4th Avenues, auto traffic on 2nd through 5th Avenues was paralyzed, exacerbating rush hour congestion.

With some foresight, albeit a bit fuzzy, the new station's underground garage and surrounding structures were reportedly built so as to allow the tracks to be relocated underground. This would not only grade-separate the tracks through town, but also accommodate a future BART subway, as was envisioned in the late 1990s while construction of the SFO extension was underway.

The problem is now this: the new station building and underground parking encroach on the railroad right of way and do not leave the necessary clearance for four tracks, as likely required for Caltrain and HSR, whether at, above, or below grade. Worse, a couple of blocks south of the station, San Mateo's new downtown cinema and Main Street parking garage were completed in 2003 and encroach on what was once railroad right of way, leaving just 50 - 60 feet for the tracks (see Caltrain right of way map).

There will be no easy or cheap solutions to these constraints. In discussions about a preliminary grade separation footprint study for downtown, city staff makes the following key observations:
While no decisions have yet been made, and despite the city's stated preference for a depressed alignment, the elevated alignment may present the least physical impact to property adjoining the tracks, although the visual impacts are worst. The city is considering options to mitigate the Berlin Wall effect, including building the track on a viaduct instead of retained fill. Contrary to San Mateo's official preference, the California High Speed Rail Authority shows an elevated track profile with 15-foot embankments through San Mateo in their program EIR/EIS; this may or may not be the preferred alternative once they complete the project EIR/EIS.

The issue of track alignment through downtown San Mateo is discussed in much greater detail in Threading the San Mateo Narrows. That discussion includes diagrams showing various track configuration options such as the elevated shown below.

For more details, read all about Threading the San Mateo Narrows. 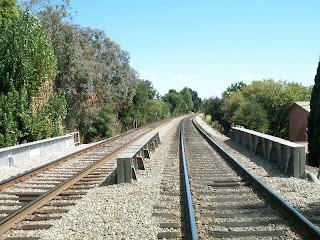 North of downtown, the tracks curve through dense residential blocks on right of way that ranges from 60 to 90 feet wide, less than the ~75 feet required to run four tracks on a retained embankment, and certainly less than the ~110 feet required to excavate a trench or tunnel. The tracks cross four residential streets (Poplar, Santa Inez, Monte Diablo and Tilton avenues) on low-clearance bridges that have long been slated for refurbishment.

The key question for downtown and the North Central neighborhood will concern the vertical alignment of the tracks. The close proximity of these residential blocks to downtown, combined with the gentle track gradients required for freight trains (yes, freight trains), will require that these areas be considered as one.

The vertical profile of the existing tracks in San Mateo is shown in the figure below. This figure was created from Caltrain track survey data, with the vertical scale greatly exaggerated. The grade level of cross streets is estimated from the known vertical clearance at each location; the level of creeks is likewise estimated.

We make a few assumptions (for more background on where these came from, read about The Shape of Palo Alto):
Scenario #1: track elevated throughout. With a 1% gradient limit and a 10 kilometer vertical radius constraint, this is what San Mateo would look like. We assume each road is depressed by 5 feet (something that can be done with little impact to adjoining frontage), with the rails raised by 15 feet. It is likely that a viaduct structure would replace the existing embankments, possibly making room for a rebuilt Railroad Ave. All vehicle height restrictions in North Central would be removed. Worth noting, the elevated alternative does not require the closure of any crossings, unlike depressed alternatives.

Scenario #2: trench through downtown. To shorten the sloping approaches and reduce the depth of the trench, we assume each road is raised by 5 feet (something that can be done with little impact to adjoining frontage), with rails depressed by 25 feet. Even this 25-foot trench penetrates below the water table and will require constant pumping to keep dry. With the 1% gradient limit desirable for freight trains, this design would require the closure of Villa Terrace, Bellevue, Poplar, Santa Inez, Monte Diablo and Tilton avenues, unless those streets were either raised or depressed with considerable impact to frontage on either side of the tracks.

Scenario #3: trench through downtown, with steep approaches. With a less stringent gradient limit just a shade over 2%, difficult for freight trains but easily handled by high speed trains and Caltrain, the approaches to the trench are much shorter. This allows underpasses at Villa Terrace, Bellevue and Poplar and reduces the need to close cross-streets. Santa Inez, Monte Diablo and Tilton would likely still be closed.

Scenario #4: tunnels. While this alternative will no doubt be studied by the CHSRA, it is unlikely to be implemented due to a host of disadvantages, not the least of which is the astronomical cost. The sloping approaches to a tunnel diving under downtown are likely to present even greater interference with cross-streets than the depressed trenches described above.

Whatever alternative is ultimately favored, one must keep in mind that the biggest constraints on the vertical alignment of the tracks come from freight trains, which don't handle steep grades well and require very high vertical clearances. The more nimble electric trains used by HSR and Caltrain would easily handle steep gradients up to 2.5%, and would require about 3 feet less vertical clearance. In short, freight trains may have a direct impact on San Mateo neighborhoods.

The southern half of San Mateo is an area currently slated for extensive re-development. It does not have nearly as much access across the tracks as northern San Mateo, and the available right of way is far less constrained, generally greater than 100 feet (see maps for mileposts 18, 19 and 20). The area encompassing the Hayward Park and Hillsdale Caltrain stations (and the former Bay Meadows race track) is slated for redevelopment as described in San Mateo's Rail Corridor Transit-Oriented Development Plan.

Hayward Park includes a reverse curve in the tracks (curving right, then left). The northern curve at milepost 18.8 has a radius of just 1100 meters, good for about 95 mph. This curve made #5 on our list of Top Ten Worst Curves on the peninsula. While it was already flattened by shifting the tracks 20 feet westwards in the year 2000, this curve may need to be straightened some more so that high speed trains don't need to slow down as much in this area. This may not please residents of South Boulevard. 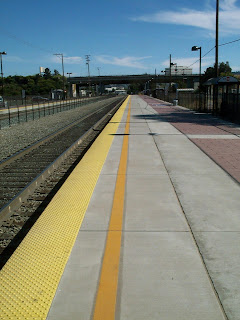 The Hayward Park Caltrain station was rebuilt in 2000 and moved slightly to the south of its former location. The original station provided convenient pedestrian access across the tracks at 16th Ave; the City is now considering a new pedestrian underpass at this location to restore the access that was lost after the move. The new Hayward Park station was built for three tracks, although it currently has only two tracks. The southbound platform already includes a cut (see photo at right) allowing it to be trimmed back to make room for a third passing track. Whatever the original intent of this configuration, the station will likely be entirely rebuilt when high speed rail comes through town.

The Route 92 overpass (actually two side-by-side bridges, seen in the background of the photo) provides ample clearance for four tracks.

The Hillsdale Caltrain station is already planned for relocation to the site of the former Bay Meadows station, and will be located between newly constructed grade separations at 28th and 31st avenues, connecting the west side of El Camino to the newly developed Bay Meadows area. The tracks will be elevated over 25th, 28th and 31st, linking up to the existing grade separation at Hillsdale Ave. These long-standing plans by the Caltrain JPB and the City are unlikely to be altered by the HSR project, except for quadruple tracking; for a detailed description, refer to Chapter 4 of San Mateo's Rail Corridor Plan. The resulting vertical profile is shown in the diagrams above.

South of Hillsdale, the frontage along the east side of El Camino Real is already owned by Caltrain, Samtrans or Union Pacific; while businesses on that narrow strip of land will likely be displaced, plenty of land is available for expansion of the tracks.

San Mateo promises to be one of the biggest design challenges on the peninsula. The CHSRA certainly has its work cut out for it, with a 50-foot right of way threaded through dense city blocks surrounded with residential neighborhoods, with a creek thrown in for good measure.

NOTE: This post will be updated continuously, as warranted by additional information or new events relating to San Mateo.
Posted by Clem at 8:24 PM