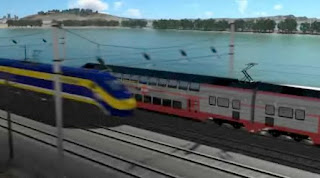 How much rail traffic can we expect on the peninsula by the year 2030? Both the California High Speed Rail Authority and Caltrain have projected ridership figures that allow us to estimate overall traffic levels on the peninsula corridor. Ridership figures are used to sell transportation projects to the public; more often than not, they are slightly overstated. Accordingly, consider the analysis below to be an upper bound.

Caltrain has about 37,000 boardings per weekday. At 98 trains/day x 640 seats/train, this figures to a 58% load factor (the average proportion of occupied seats) assuming all trips go the full length of the line. In practice, the average load factor is likely under 50%, although the most popular rush hour trains do approach 100% (i.e. standing room only).

Caltrain plans to grow its ridership, independently of high speed rail, by using electric rolling stock that can operate faster and more frequently. Their Caltrain 2025 plan calls for a peak capacity increase from 6400 seats/hour to 11000-16000 seats/hour by the year 2025. Assuming trains remain at the same seating capacity, this implies an increase in peak traffic from 5 tph to 9-12 tph per direction. Total capacity would roughly double, to about 200 trains per weekday.

Is this a reasonable estimate? It is useful to compare with BART's current traffic through the transbay tube. At peak times, BART runs about 20 tph in each direction, in 10-car trains that seat 700 and often carry crush loads of over 1000 people. Considering that BART serves a much greater geographical area than the peninsula, their 28000 seats/hour peak capacity in 2009 seems at least consistent with Caltrain's lower bound of 11000 seats/hour, achieved 15 years later. The verdict on Caltrain ridership projections: plausible (update: see comments section for a dissenting verdict: highly optimistic) 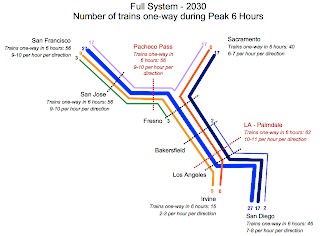 The California High Speed Rail Authority has published various ridership estimates over the years, the latest of which is contained in their 2008 business plan. The chapter on ridership and revenue estimates that by 2030, the peninsula corridor will see 8 - 10 tph per direction during six peak hours (6-9AM and 4-7PM) and about 6 tph per direction off-peak. That's a total of roughly 220 trains per weekday or 1300 trains per week.

Interestingly, there are no trains that skip San Jose or terminate at San Jose, which neatly sidesteps the rivalry between San Francisco and San Jose for the title of most important Bay Area destination.

If you assume the average HSR train seats about 400 people, that amounts to 27 million seats a year. That compares to 20 million seats a year currently offered by airlines between the Bay Area and the LA basin. (Southwest Airlines alone flies nearly 100 flights daily each way, although each one seats only about 130 people). Compared to airline traffic alone, the HSR figures sound optimistic, although most of the ridership is claimed to come from automobile traffic on the 5, 99 and 101 freeways, rather than airline traffic. Accounting for traffic growth between 2009 and 2030, which would double in that time span at an annual growth rate of just 3.5%, the verdict on HSR ridership projections is: plausible. (update: see comments section for a dissenting verdict: ludicrous)

Let's add it all up. Since peak hours for Caltrain and HSR will coincide with morning and evening rush hours, it is conceivable that peak traffic on the peninsula could reach 20 tph in each direction by the late 2020's (9-12 tph Caltrain and 8-10 tph HSR). Off-peak traffic would be closer to 10 tph in each direction (4 tph Caltrain and 6 tph HSR). Total weekday traffic would be about 420 trains (including both directions), an increase of four times over today's traffic levels over a span of two decades. To an observer at any given place along the peninsula corridor, there would be a train passing by on average every 1.5 minutes at rush hour, and every 3 minutes off-peak.

In San Francisco, there is a different implication to this 20 tph peak figure: since all trains must run at the same speed in the final approach to San Francisco, as dictated by the tight curve radii in this area, they would no longer need to overtake each other. Theoretically, running 20 tph through this speed-restricted area could be done on fewer than four tracks-- possibly just two! With homogeneous speeds, BART does it every day through the transbay tube, meshing together trains from four far-flung lines into a 20 tph trunk with just two tracks. Similarly, Amtrak and New Jersey Transit run up to 24 tph each way on the two tracks under the Hudson river. In both cases, there are efforts underway to increase the number of tracks, but it does give you a feel for the maximum throughput of two tracks when traffic is perfectly homogeneous.

When a train reaches the end of the line in San Francisco, it needs to be cleaned, serviced and provisioned for its next trip. From arrival to departure, these operations typically take about an hour on other rail systems. If time is of the essence, which it will be in San Francisco, the turnback time might be reduced to about 30 minutes, very low by rail standards and commensurate with airline operations. The Transbay Transit Center is planned to have just six platform tracks shared by HSR and Caltrain, a very small number by international rail terminal standards. If a train occupies a platform track for just 30 minutes at a time, the maximum turnback capacity of a six-track terminal is 12 trains per hour.

Solutions to this Transbay turnback constraint include:
Whatever happens between now and 2030, it is likely that the peninsula corridor will be hardly recognizable when compared to its current state.
Posted by Clem at 9:00 AM