San Bruno is the point of departure for the "Bayshore Cutoff" to San Francisco, built in the early 1900s by the Southern Pacific Railroad. The rail line to San Francisco originally went straight through San Bruno and detoured around the west side of San Bruno mountain, where BART runs today. The cutoff was built around the east side of the mountain, then through a series of tunnels, as a shortcut into San Francisco. This is the alignment used by Caltrain today and planned for HSR.

One important consequence of this history is that San Bruno is left with one of the sharpest curves on the peninsula, where the cutoff formerly diverged from the old main line. The radius of the curve is 1800 feet (550 meters), giving it a maximum safe speed of about 70 mph (115 km/h). Caltrain has a speed limit of 60 mph at this location. Slowing down a high speed train from a peninsula cruise speed of 125 mph (200 km/h) to take the existing San Bruno curve would cost more than a minute, or over half a percent of the entire SF to LA running time. Considering how much investment is being made to shave seconds off run times for the entire system, a 1-minute penalty in San Bruno for a single curve should raise some red flags at the CHSRA.

Consider the "San Bruno Curve" a significant obstacle to HSR on the peninsula.

To run trains safely at 110 mph through the curve, it would have to be straightened to a radius of 1200 m. This is shown as a blue outline in the map to the right (see the Top Ten Worst Curves for more information on curves). Straightening the San Bruno curve for HSR is complicated by several factors:
The next significant curve, 2.5 miles to the north, around the base of San Bruno mountain at Sierra Point, has a radius of about 2600 ft (800 m), giving it a maximum safe speed of about 85 mph (140 km/h). This curve cannot be straightened due to the local topography, but is sufficiently distant from San Bruno to allow trains to accelerate to 125 mph (200 km/h) by the time they reach San Bruno curve.

San Bruno has grade crossings at Angus Ave, Scott St, and San Mateo and San Bruno Avenues. The latter is known as one of the most dangerous crossings on the peninsula, because San Mateo Ave crosses the tracks at an acute angle and the nearby curve limits visibility for trains, auto traffic and pedestrians.

Caltrain and the city of San Bruno have long-standing plans to grade-separate the crossings in San Bruno. These plans have been delayed several times due to funding issues, most recently until 2012. Caltrain has produced a detailed Grade Separation Study Report, from which the preliminary track layout is of particular interest. The city of San Bruno is developing a downtown and transit corridors plan that includes the Caltrain station area. The San Bruno Caltrain station would be rebuilt to the north of its current location with four tracks, elevated over the San Mateo Ave / San Bruno Ave crossings. The streets would be sunk to pass under the new station. The Scott St. crossing would be closed to auto traffic, with a pedestrian / bike underpass built instead. The proximity of the BART tunnel, which passes under the Caltrain tracks just south of San Mateo Ave, is a complicating factor discussed in the report.

With the passage of proposition 1A, Caltrain's plans for San Bruno should be thoroughly re-evaluated, regardless of the studies, $10 million of preliminary engineering, committees, public input and debate of the last several years. With high speed rail in the mix, the requirements have changed, and the biggest problem with the existing plans is the San Bruno curve.

The California High Speed Rail Authority's Bay Area EIR / EIS, Appendix D, shows the alignment through San Bruno as a 15-foot tall retained fill embankment with split grade separations (exactly as planned by Caltrain, except with four tracks all the way through town). The rails dip down briefly to grade level as they pass under the I-380 viaduct.

The CHSRA gives no indication of an intention to straighten San Bruno curve; their plans show the tracks following the existing Caltrain right-of-way. 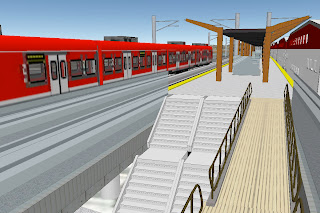 Download Google Earth model, enable the Terrain checkbox, and click on Tour. Make sure to fully explore the details of the station area, including stairways and platform canopy. (The necessary viewer, Google Earth, is free and easy to install.)

NOTE: This post will be updated continuously, as warranted by additional information or new events relating to San Bruno.
Posted by Clem at 9:33 PM