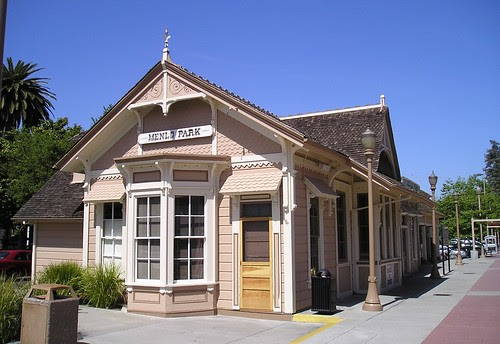 Menlo Park is the site of California's oldest passenger train depot, built in 1867. The town has a closely spaced series of four grade crossings near its center, at Ravenswood, Oak Grove, Glenwood and Encinal Avenues. Trains must blow their horn nearly continuously when they pass through the area.

Menlo Park, along with its affluent neighbor Atherton, is noted for its official opposition to HSR, despite most residents having voted for Proposition 1A. The city also joined a lawsuit to make Altamont Pass the preferred HSR entry to the Bay Area, instead of Pacheco Pass. While this would remove HSR from Menlo Park's downtown, many residents don't realize that the Altamont alternative would still pass through Menlo Park, impacting the Suburban Park and Lorelei Manor neighborhoods instead.

The existing railroad land through Menlo Park is narrower than 100 feet along most of its length. Along Stone Pine Lane, it is 75 feet wide. Between Oak Grove and Glenwood Avenues, it is just 60 feet wide, although abutting land is not residential and could be taken with only minor disruption. South of the station, the right of way is 80-100 feet wide. Maps of the existing ROW boundaries are available for mileposts 28-29 (north end of town) and 29-30 (south end of town).

Menlo Park has planned for grade-separating the four crossings since 2001. With the HSR project well underway, at least one design requirement is coming into better focus: the probable need for four tracks.  A grade separation study and presentation (developed in 2003 - 2004) consider the impact to adjacent properties, shows some renderings of a few concepts, and also feature some nice illustrations of construction staging. This study anticipated quadruple tracking, although Menlo Park's latest official position (as of 2015) is to oppose any more than two tracks.

The CHSRA's project-level environmental work on the San Francisco - San Jose HSR project in the 2009 - 2010 period resulted in preliminary design alternatives including elevated, at-grade and below-grade variations of the vertical alignment through Menlo Park.

Any changes to the vertical alignment of the tracks through Menlo Park must be coordinated with neighboring Atherton, which has two crossings just over the city line, too close to allow grade changes to a different elevation.

The figure below shows a split grade separation, with the rails raised by about 15 feet and the roads sunk by about 5 feet. Pedestrian sidewalks would remain at grade.

Alternately, the tracks could be sunk fully into a 30-foot deep trench, as shown in solid red line in the next figure. This would leave roads at grade, although it would likely result in greater construction impacts.

The existing Menlo Park Caltrain station was rebuilt in 2000. Rebuilding it with four tracks would require demolishing the new platforms, removing heritage trees on the east side of the station, and considerably narrowing Alma St. The historic depot building (and the baggage building that houses the model railroad) would be relocated to make way for the new southbound track. The 2003 grade separation study presentation contains relevant diagrams.

Menlo Park has long standing plans to install a pedestrian and bike tunnel under the tracks to link the Burgess recreation area with Safeway and the neighborhoods on the other side of El Camino Real. This tunnel would be located about here, under the raised berm that currently supports the two existing tracks. Before this project proceeds any further, it should take into account future quadruple tracking for HSR.

A few vocal residents have vigorously opposed HSR on the grounds that it will degrade the quality of life in Menlo Park. In particular, vocal critics Martin Engel and Morris Brown, who live near the tracks, have advocated against Proposition 1A by founding Derail High Speed Rail, a group that opposes HSR on economic and geopolitical grounds... and, perhaps also, because of their back yards' proximity to the tracks. Another Menlo Park resident, Russell Peterson, has filed a lawsuit claiming that the HSR project usurps the Union Pacific Railroad's exclusive rights to operate intercity passenger trains on the peninsula.

NOTE: This post will be updated continuously, as warranted by additional information or new events relating to Menlo Park.
Posted by Clem at 2:34 PM