Millbrae, by virtue of its proximity to SFO and its connection with BART, is planned as an intermediate HSR stop. The existing BART / Caltrain station is to be expanded, and is naturally the focus of the HSR project in Millbrae. 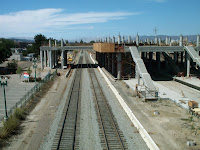 Plans for the Millbrae HSR station, described in the CHSRA's environmental impact documents, call for four tracks to pass through, with two outside platforms. This is shown as Option A in Figure 1 below.

Unfortunately, the incompetent design of the existing Millbrae station (opened in 2003 and billed as the largest multi-model station west of the Mississippi) has squandered much of the space available within the Caltrain right of way. Massive support columns for the expansive station mezzanine have been placed right where you'd want to run extra tracks, and a third platform track at the south end of the station (presumptuously built to terminate some Caltrain services, assuming everyone would want to ride BART into San Francisco) sits unused, with no possibility of continuing north through the station. The photo at right, taken in 2000 during construction, illustrates how a forest of concrete pillars now constrains the right of way.

The total lack of foresight in this design is breathtaking.

To make room for four tracks, the existing southbound platform and part of the mezzanine that it supports (including the ill-placed pillars) may have to be demolished and rebuilt a few dozen feet further to the west.

Millbrae is an important stop for Caltrain, ranking 5th in ridership, and even higher when counting BART. As a measure of its importance, every Baby Bullet stops there. Assuming one wanted to make Millbrae an important interchange point with HSR, it would make sense to maximize the opportunities for cross-platform transfers. Cross-platform transfers require an island platform between two tracks, allowing passengers to quickly and easily change trains on the same platform. For example, a much-touted cross-platform transfer is already possible between Caltrain and BART in the northbound direction.

With four tracks through the station, a solution that maximizes cross-platform transfers would consist of two island platforms flanking the center pair of express tracks. The existing northbound island platform shared with BART would be preserved. Advantages:
There are also some disadvantages. Non-stop HSR trains pass platforms at 125 mph, likely requiring a physical safety barrier. Other disadvantages depend on how this configuration is built. Two possibilities are labeled Option B and Option D, in Figure 1 below. 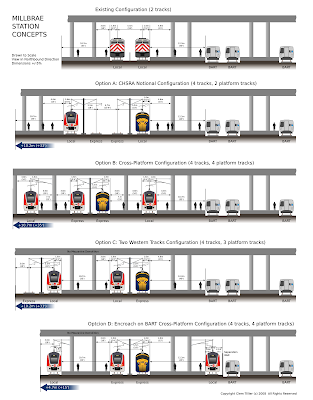 Figure 1: Millbrae station configuration options
Option B, to construct new island platforms and preserve the existing BART cross-platform access, increases the station footprint the most. The westernmost track is shifted ~60 feet to the west (vs. ~30 feet for thru configuration), with possible impact to private residences to the north and Millbrae Ave overpass to the south. As in the CHSRA's Option A, most of the station mezzanine and support columns must be reconfigured.

Option D (raised in the very thoughtful comments to this post) calls for converting the westernmost BART track to use by Caltrain / HSR. The way BART is operated, with half the trains terminating at SFO, the Millbrae station is underused. The eastern BART island platform is usually closed to service. With the expected HSR and Caltrain improvements, BART has no chance of being extended past Millbrae. All of these factors support the notion of cutting the BART portion of the Millbrae station from three platform tracks to a more reasonable two.

The biggest advantage of this approach is to preserve the existing mezzanine and platform configuration, without the need for large-scale demolition. The cross-platform transfer to BART (the cherry on the cake!) would be lost, in favor of better cross-platform options between HSR, Caltrain express and Caltrain local services. Option D also has the least encroachment on land to the west of the station, which may ultimately seal the deal.

Constructing Option D would require some reconfiguration of the existing station, such as removing the eastern Caltrain siding track, removing the western BART tail track, reworking the BART subway portal, and probably constructing a physical barrier to separate BART from Caltrain/HSR on the adjacent track.

Another possibility that preserves the existing mezzanine structure is Option C, although it only provides three platform faces for HSR and Caltrain. This option involves routing two new tracks to the west of the existing station, with some of the disadvantages mentioned above.

None of the options discussed here is perfect; all of them have drawbacks because of the suboptimal way the station was originally built. If the city of Millbrae, Caltrain, and the CHSRA are serious about making the Millbrae station live up to its intermodal billing, they should opt for the lesser of all evils (Figure 1 Option D), and not the design currently described in the EIS/EIR documents. While the BART cross-platform transfer (the station's political selling point) would be lost, other advantages far outweigh this loss.

Whatever the final station configuration, adding two tracks to the Millbrae station will expand its footprint to the west, encroaching on an area locally known as 'Site One,' where the city of Millbrae and private developers desire to build a Transit Oriented Development. Ironically, the developers have claimed that HSR threatens to derail their TOD plans, quite shamelessly undermining their claim to be "Transit Oriented." The people who run Caltrain appear to have capitulated prematurely by promising the developers that HSR can be accommodated within the existing station footprint, an option that even the CHSRA doesn't try to pass off as feasible.

The CHSRA has also penciled in another parking structure for 230-400 cars to the west of the station on Site One, apparently without regard to the existing under-utilized 3,000 space BART parking structure, which has plenty of surrounding land for expansion.

Most road crossings in Millbrae are already grade separated. A separation at Center St, at the entrance to Marina Vista, remains to be built. This is a constrained location where the BART tunnel box runs immediately to the east of the crossing, which prevents lowering the road.

The BART to SFO project (which, as built, is much better described as BART to Millbrae) was brought to you by Quentin Kopp, who is now chairman of the High Speed Rail Authority. While Kopp has clearly established a track record in bringing large transportation projects to fruition, his BART extension shows all the signs of having satisfied not just a transportation need, but the raw urge to pour way more concrete than strictly necessary.

A lot of this concrete was poured on, under, and around the Caltrain right of way, constraining it in various unpleasant ways that will come back to bite us (the taxpayer) as HSR is built. The botched Millbrae station discussed above is only the tip of the iceberg. The construction companies won't mind: there's real money to be made in jackhammering old concrete to make room for new concrete. 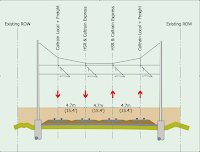 According to the CHSRA's environmental impact report Appendix 2D for the Caltrain Corridor, the HSR tracks will run through Millbrae at grade, right next to the BART tracks. But after BART was built so expansively into the Caltrain right of way, there isn't a lot of room left to build another pair of tracks. For example, take a look here and here, and think about how to fit in the planned 100-foot, 4-track right of way as shown at left.

NOTE: This post will be updated continuously, as warranted by additional information or new events relating to Millbrae. Last updated 09 December 2008.