To people who live on the San Francisco peninsula, High Speed Rail will be defined by four principal characteristics:
According to Quentin Kopp, chairman of the California High Speed Rail Authority, the peninsula line could be operational in 2015. 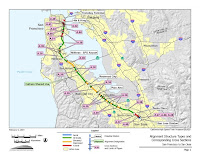 We can try to draw the big picture from the CHSRA's Environmental Impact (EIR/EIS) documents for the Bay Area, published in May 2008. There's lots of detail in the report and appendices.

A map of the peninsula from a 2004 EIR/EIS document (at right) summarizes where the peninsula tracks are planned to run at-grade, in tunnels, or in elevated or sunken sections. The CHSRA also provides a more recent, interactive Google Map. These maps are clearly preliminary, as anyone with detailed local knowledge will attest; they will be fleshed out in the next few years during the detailed engineering phase.

HSR plans call for building most of the new peninsula tracks at ground level, or in elevated / sunken sections as labeled in the above map. Cross sections of these configurations are provided, with the most common shown below.

Caltrain has some additional dimensioned cross section drawings in Chapter 2 of their electrification EA/DEIR (see in particular Figure 2.3-3).

At any location, the choice of configuration will depend on a variety of factors:
How will the arrival of HSR alter existing Caltrain tracks, stations and crossings? In future posts, this blog will focus on some unique situations at various locations on the peninsula.
Posted by Clem at 8:59 PM