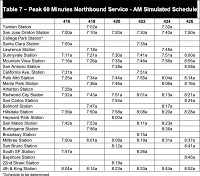 As they plan their future operational concept, it is important that Caltrain base their stopping pattern on raw population and jobs data and not on the highly distorted ridership patterns induced by the Baby Bullet Effect.
Posted by Clem at 5:09 PM