Mike Rosenberg pens a scathing indictment of the Peninsula Corridor Joint Powers Board that runs Caltrain, calling out the board for rubber-stamping everything that is submitted to it by Caltrain staff (including, presumably, the MOU with high-speed rail). The number of Yes votes since the last dissenting vote: 1,591. With only 9 board members, that's 176 consecutive unanimous Yes votes!

One of the dangers of having staff run the show is that an organization will pursue projects for their own sake, to perpetuate its own bureaucratic existence. Case in point: Caltrain's CBOSS train control project, where a small back-and-forth transit operation runs amok with a $230 million technology research and development project that is almost certainly doomed to development failure. Speaking of train control...

ERTMS on the Peninsula? 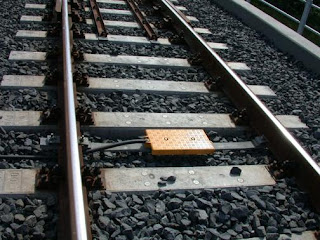 The CHSRA staff memo for the recent board meeting happens to tally the money currently allocated for HSR in California. One of the items is $16 million of ARRA stimulus money, previously requested as an ear-mark for CBOSS, but now described as funding the "design/implementation of the first Positive Train Control/ERTMS interface implementation on the Peninsula." Say what?

(to find out what the acronyms CBOSS and ERTMS describe, please read here.)

An optimist would note this is the first time that 'ERTMS' and 'Peninsula' are mentioned in the same sentence in official agency materials, rather than just a blog. That much is encouraging.

A pessimist would note that "interface implementation" means an interface between the existing ERTMS and Caltrain's proposed CBOSS, assuming they would co-exist. This is the worst of both worlds: not only is CBOSS 100% functionally redundant with ERTMS, i.e. it will do the exact same thing that ERTMS already does, but interfaces between multiple complex safety-critical systems are astonishingly expensive to implement successfully. If CBOSS wasn't enough of a promise of years of delay and cost blowouts, then kludging ERTMS on top of CBOSS is an absolute guarantee.

The high-speed rail project has very strongly implied that ERTMS would someday be installed on the peninsula. The recent train control technical memos (see TM-3.3.x) explicitly state that the selected technology must already exist as part of an operating system with proven experience worldwide on at least one high-speed passenger railway. That leaves exactly two solutions: (1) the ERTMS standard supported by the world's biggest names in train control, being deployed in dozens of countries worldwide, and (2) the Japanese Digital-ATC product by Hitachi, deployed in Japan and Taiwan. Wanna place bets?

Show Some Teeth, For Once!

One thing the Caltrain board of directors might consider sinking its teeth into (if it has any?) is the CBOSS fiasco-in-the-making. The correct answer, for a small fiscally-vulnerable operation like Caltrain, is to use tried and true solutions whenever they are available. When the wheel already exists (ERTMS) you don't take the risk of re-inventing the wheel (CBOSS), especially when HSR has already telegraphed its intent to deploy ERTMS and might even pay for it!

At this point, a few wrong moves like CBOSS can quite literally end Caltrain's chances of survival.
Posted by Clem at 10:20 PM