Millbrae, Half a Billion Cheaper

The powers that be have determined that the Millbrae intermodal station does not have sufficient right-of-way width to accommodate four tracks of Caltrain and HSR, in addition to BART. That is why the Supplemental Alternatives Analysis from last August and the Millbrae preliminary station footprint from October consider only one solution: three tracks at grade and the fourth track sent down into a trench and covered tunnel, along the profile shown below: 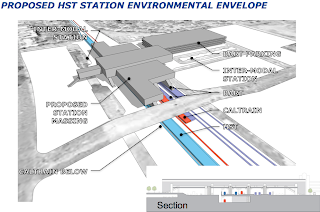 This 2.5-mile trench and covered tunnel facility would dive up to 60 feet below grade, passing below the Hillcrest Blvd underpass (itself passing under the at-grade tracks) and nearby storm drains, as well as under the Mills Creek to the south. It would also pass directly under the existing Millbrae station, requiring the excavation of an underground cut-and-cover "train box" as shown in the section drawing at right. If the cost estimates are to be believed, this one-track trench and tunnel facility would cost about $500 million more than at-grade tracks.

There may be legitimate reasons why a four-track at-grade arrangement can't fit in the existing Millbrae station. But are they half billion dollar reasons? For that kind of money, you'd imagine there would be some serious pencil-sharpening going on.

One of the very first issues covered in these pages, way back in 2008, was the amazing lack of foresight embodied in the design of the Millbrae station. The structural grid of the station mezzanine was laid out so narrowly, and so far to the west of the sprawling BART facilities, that it now precludes four tracks from being built through the Caltrain side of the station without major impacts to the structure itself and to residential areas adjacent to the west. 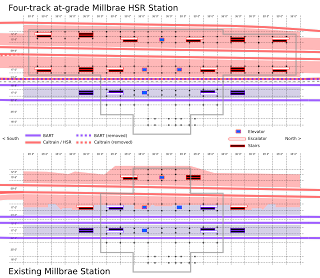 If the going-in assumption is that BART facilities cannot be impacted by HSR construction, no matter what the resulting cost, then we do indeed end up with the solution proposed by the CHSRA.

But we live in a world where cost matters.

That's why it's worth exploring a significantly cheaper option: converting one BART platform track (of three) for use by Caltrain and/or high-speed rail. The diagram at right shows what the Millbrae might look like under such a scenario. The structural grid is preserved, and no encroachments occur outside the right of way to the west of the station (to the top in the diagram.)

The diagram below shows the wider context of the track layout, including station approaches and tail tracks. (Warning: 2.1 MB image)

What are the pros and cons?

Yes, there are difficult design constraints. Yes, this proposed design violates a few engineering specifications and even some regulations. Yes, it will be politically challenging to infringe on BART. But when a half billion dollars hangs in the balance, it's time to work smarter and not harder. It would be reckless and irresponsible not to explore a compromise solution, through a carefully considered combination of design exceptions, regulatory waivers, and inter-agency agreements. Taxpayers should demand it.

And if that doesn't work out, stop everything, tear down the whole station and start over from scratch with a proper track layout. The entire Millbrae Intermodal station complex, including 3,000 parking spaces, cost $75 million to build ten years ago. In today's dollars, it would be about $100 million, ONE FIFTH of the cost of the below-grade "solution".
Posted by Clem at 11:00 PM