All railroads that will be deploying Positive Train Control (PTC, read all about it here) before the mandated deadline of 2015 were required by federal law (49 CFR Part 236 Subpart I) to submit a PTC Implementation Plan by April 16th, 2010. This plan, subject to FRA approval, is where each railroad explains how it plans to deploy PTC.

Caltrain's PTC Implementation Plan (4.5 MB PDF) was submitted in late March, and is available to the public under docket FRA-2010-0051.

Not surprisingly, the centerpiece of Caltrain's PTCIP is the Communications-Based Overlay Signal System (CBOSS), a new PTC system that Caltrain is developing. CBOSS, described in a Caltrain fact sheet, is about to go out for bid. The importance of this system cannot be overstated, since the additional safety it confers on Caltrain's operations are a prerequisite for the transition to a new fleet of electric trains as well as the extensive reconstruction of the peninsula corridor to accommodate high-speed rail. PTC is a necessary step on the path to reinventing the peninsula corridor, and lies squarely in the schedule's critical path--never mind any federal deadlines. There remains a significant amount of doubt about whether Caltrain can actually pull it off.

The stunning omission from Caltrain's PTCIP is any mention of high-speed rail. HSR is not mentioned even a single time anywhere in this 123-page document. 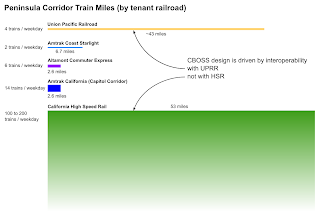 While HSR will not be anywhere near entering service by the PTC deadline of December 31st, 2015, the technical interoperability issues with high-speed rail are of paramount importance. HSR is the ultimate "tenant railroad" since it plans to operate on the order of 200 trains per day along the entire length of the peninsula, as opposed to 24 trains per day, most for only 2.6 miles between San Jose and Santa Clara, for all other tenant railroads combined. The ratio of train-miles operated on Caltrain territory for HSR vs. all other tenant railroads will be nearly two orders of magnitude as shown in the chart at left!

Looking at the chart might elicit an important question: with which "tenant railroad" will it be most important to interoperate? The Caltrain PTCIP provides the answer, point blank: the Union Pacific Railroad (see section 5.2), shown in yellow on the chart. That's right, because of an assumption that UPRR cannot be bothered to fit additional PTC equipment on the handful of its locomotives that operate on the peninsula, or an assumption that HSR may never come to fruition, CBOSS must be designed to be 100% compatible with whatever technology UPRR comes up with by 2015. There are two possible outcomes to this approach:
Neither of these outcomes is good for state or federal taxpayers, and the latter is a disaster for the train riding public. Both outcomes are quite profitable for the companies that will design, build, deploy, test, certify and operate the respective PTC systems on the taxpayer's dime.

One would think that enough time has passed since November 2008, when the high-speed rail bond was approved by California voters, to develop at least an inkling of a plan for how HSR will mesh with Caltrain in the area of PTC. One would further expect that Caltrain's insistence that the peninsula corridor will be a fully-shared four-track system would cause it to pay special attention to questions of future interoperability with HSR. One would even further expect that the California High-Speed Rail Authority's apparent plan to use ERTMS (an existing European PTC standard that has similar functionality, but is different from CBOSS) would at least be acknowledged in Caltrain's PTCIP. 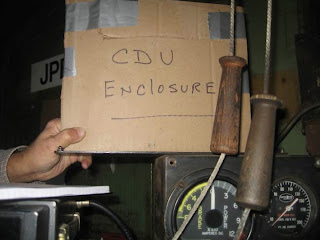 Is this a lack of attention to detail? Evidently not: Caltrain's PTCIP goes into considerable detail on how individual PTC hardware components will be mounted on its locomotive fleet, as evidenced by the photo at right. The photo, included in an Appendix of the PTCIP, shows an early prototype of a CBOSS Central Display Unit (at the same stage of development as the CBOSS software) being fitted to the cab of a Caltrain locomotive. What is most visible in this photo is attention to the wrong details, details that are trivial, while other enormously important issues are seemingly entirely overlooked.

If one requirement of a PTCIP is to describe how a PTC system will provide interoperability of the system between the "host railroad" (Caltrain) and the ultimate "tenant railroad" in the form of high-speed rail, Caltrain's PTCIP has fallen woefully short.