Another all-stops local round up of relevant peninsula rail news. 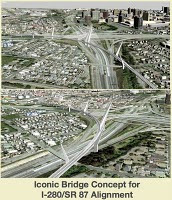 The California High Speed Rail Authority releases its preliminary alternatives analysis for the San Jose to Merced segment (see board presentation and full report), including the section through San Jose. The result is a balanced trade-off between maximizing construction pork and placating residential neighbors, with transportation utility clearly taking a back seat. The resulting twisty aerial viaduct is already being hailed as a potential "iconic" structure for San Jose, never mind that it will permanently restrict train speeds to a disfunctional 50 mph. That's right, the curve radius will be even tighter than the existing railroad alignment, in another fine example of high-speed rail à la Californienne.

The key take-away phrase, for our dear communities on the peninsula:

After considerable study (...), it is concluded that all underground options are not practicable due to unsafe mining conditions (poor soils combined with high groundwater), construction schedule, potential for settlement, extensive surface disruption and very high construction cost and should be eliminated from further evaluation.

Caltrain declares another fiscal emergency, despite being the second-most "profitable" transit operator in the Bay Area, with a fare box recovery ratio of 43%, not far behind BART. Board member Omar Ahmad makes the shocking but astute suggestion that a wind-down plan may be needed to pull the plug on Caltrain in 2012. Maybe the specter of fighting traffic with another 18,000 cars on the road will jolt the system into providing Caltrain with a much-needed dedicated source of funding.

Bets are open for how long it will take the California High Speed Rail Authority to shed another crocodile tear about the impending bankruptcy of the owner of a 700-acre piece of prime railroad real estate.

The Bay Area congressional delegation, likely realizing that the CHSRA will never meet the federal stimulus deadlines and lose the entire $2.3 billion California HSR allocation to other parts of the state, fires off a letter to transportation secretary Ray LaHood asking for some of that largesse to be showered upon shovel-ready Caltrain capital projects.

Now if only Caltrain could get some operating funding... This is like adding a new bedroom when you can't even pay the heating bill. Operating funds create jobs too!

The grassroots group Californians for High Speed Rail writes an excellent letter to Caltrain, laying out many of the same compatibility concerns that have long been the central topic of this blog. Hats off to them, and here's hoping that the letter will have more impact than one guy on his internet soapbox (right here.)
Posted by Clem at 6:20 PM