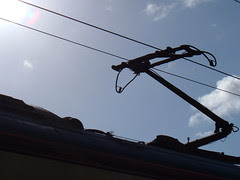 While the recently released Alternatives Analysis steals the spotlight, in the background there is even more trouble brewing for Caltrain. Last week, Caltrain's electrification project was stopped dead in its tracks by an explicit lawsuit threat made on behalf of two litigious organizations, the Planning and Conservation League and the Community Coalition on High-Speed Rail. The former is a plaintiff in the so-called Atherton lawsuit, and the latter is associated with another pending lawsuit.

The threat was made in this letter (640 kB PDF file) from attorney Gary Patton.

The letter not only complains of the age of the EIR (last circulated for public comment in 2004), but more importantly, it argues that the project has substantially changed and has effectively become part of the peninsula HSR project, by virtue of the MOU signed by Caltrain (a copy of which is attached to the letter) and the funding arrangement whereby HSR funds might pay for a portion of the electrification project.

The implications of this legal threat to the Caltrain electrification project are easy to deduce:
Danger and Opportunity

With a barrage of lawsuits being lined up against the peninsula HSR project, Caltrain is already getting caught in the crossfire. Any project that enables or facilitates the eventual construction of HSR is seemingly fair game. For better or for worse, Caltrain is now in a shotgun marriage with HSR, enforced by these legal threats, with environmental clearance, engineering and construction likely unable to proceed independently. There is very little that Caltrain can do about this besides duking it out in court.

On the flip side, maybe this is an opportunity to finally undertake the design of a integrated system, where Caltrain and HSR are built as a single project rather than two independent operators awkwardly sharing the same corridor. This blog has always promoted compatibility, whether it be platforms, train control, timetables, to maximize the synergy between the two systems--something in which Caltrain has shown dishearteningly little interest so far. Perhaps this setback of the electrification project will prompt some reflection.

(pantograph photograph by ztephen)
Posted by Clem at 1:25 PM