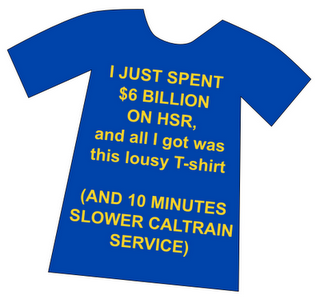 If you haven't run out of steam as you finally reach Appendix K of the recently-released preliminary alternatives analysis, you will come across an intriguing fact: by the year 2025, Caltrain plans for a best trip time of 65 minutes from San Jose to San Francisco 4th & King, and 70 minutes to the Transbay Transit Center.

The Baby Bullet we know and love does San Jose to San Francisco in as little as 57 minutes (by the timetable, which is generously padded at the end of the run to make on-time performance statistics look better). In practice, diesel bullets can and do make the run in 55 minutes.

How can this possibly be? $6 billion later the best commuter service will be 10 minutes slower?!?

How can a timetable, the very root of years of painstaking planning and carefully apportioned capital investment, the embodiment of a grand vision of improved commuter service, the next coming of the Baby Bullet, fall so terribly short of what could have been?

How many microseconds will it take for the entire NIMBY universe to latch on to this inconvenient truth?

Some observations:
Caltrain's entire strategic service plan ought to be re-oriented toward the following specific interoperability goals:
With those features, a good case could finally be made that the high-speed rail project would produce tangible benefits that trickle down in measurable ways to each and every community along the peninsula rail corridor. Sadly, right now it looks like those $6 billion will buy us 10-minute slower commuter service. This is simply unacceptable.
Posted by Clem at 9:21 PM