San Bruno Out To Bid 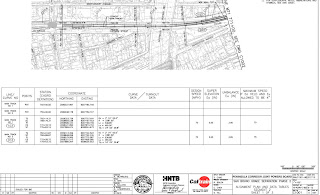 Caltrain's San Bruno grade separation project is out to bid as of March 11th. The final engineering drawings reveal the HSR-hostile curve radius of 2387 feet, good for 75 mph (see details at right). While Caltrain has been exercising eminent domain in preparation for construction, they never seemed interested in acquiring the run-down houses on the inside of the curve to straighten out what is, has been, and will now forever be the #1 worst curve on the peninsula.

Caltrain officials continue to spread the falsehood that the curve is HSR-ready and that the design speed is 90 mph. Unfortunately, at an aggressive total cant of 12 inches (6 inches superelevation plus 6 inches unbalance) this curve will forever be restricted to a bit over 80 mph. Total cant would approach a drink-spilling 15 inches to run a train through the inside curve at 90 mph, something the FRA will never allow.

That may not sound like much, but when you consider that trip time is the foundation of high-speed rail, and that the next second saved always costs more than the last second saved, San Bruno is a terrible way to start off on the HSR path. Those 25 forsaken seconds will have to be recovered elsewhere, likely at far greater incremental cost than just doing San Bruno right with a 100 mph curve.

(we'll say nothing of the doomed-to-do-over 8 inch station platforms to be constructed right in the path of the future HSR alignment... that's just the cherry on this cake!)
Posted by Clem at 10:51 PM