Burlingame, a city of trees, is increasingly aware of the impending arrival of high-speed rail. The city has taken a strong pro-tunnel stance in its EIR scoping comments, and is a founding member of the Peninsula Cities Consortium. The peninsula rail corridor in Burlingame could be described as mostly Kansas-flat and Mississippi-wide: an abundance of railroad right-of-way with relatively few constraints contrasts sharply with Burlingame's neighbor to the south, San Mateo.

The Burlingame station recently underwent a $20M renovation by Caltrain that converted the narrow center platform to outside platforms, to allow two trains to safely occupy the station area at the same time. The new platforms were opened in early 2008, just in time for the city's centennial celebration. The depot was built in 1894 in the Mission Revival style and is listed on the National Register of Historic Places (photo above by Schaffner). Not surprisingly, it is considered one of the architectural jewels of the city, and visions of what might become of it in the age of HSR differ greatly.

In the discussion of visual impacts in the program EIR, the CHSRA happened to have picked North Lane for a before/after comparison of a grade separation. The authority's photo simulation features a vaguely European structure elevated by approximately 10 feet, with electrification poles placed between the tracks--evidently to keep high voltage away from trees.

In another photo simulation that clearly seeks to convey a different message, the pro-tunnel grassroots group Don't Railroad Us! shows the depot building overwhelmed by a fully elevated viaduct executed in the worst freeway-brutalist style, with unsightly high voltage headspans reaching high into the sky.


If the tracks are elevated at North Lane, the result may not look quite as good as the CHSRA photo, but it's also a safe bet that it won't look quite as bad as the Don't Railroad Us! photo.

Weekday Caltrain service to the Broadway Burlingame station, formerly ranked #23 in ridership, was discontinued in July 2005 to allow express service to be scheduled more effectively--despite objections from city officials who pointed out that a large portion of Burlingame residents lived near that station. Unfortunately, too few of them used the train. Nevertheless, Broadway is a station that could benefit greatly from electrification and HSR. Because of improved train performance, more Caltrain stops can be made in a given trip time, and stations that once fell on the wrong side of the Baby Bullet cut-0ff have an excellent chance of being revived.

The city of Burlingame requested in its scoping comments that the Broadway grade separation project be coordinated with the nearby Broadway interchange with highway 101, where a $73 million reconstruction is planned for traffic congestion relief on what is a primary access route for the city. 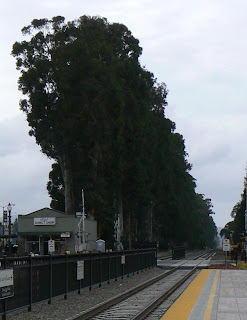 Burlingame is known for the majestic Eucalyptus trees that line many of its thoroughfares; the tree even appears on the seal of the city. Rows of mature Blue Gums (eucalyptus globulus) line the railroad tracks through most of the city (photo by K. Hecteman). The tree has a long-standing relationship with the railroad: it was reportedly cultivated in California to quickly produce timber for railroad ties. Many of these trees could be affected by the high-speed rail project because E.globulus has a root system that can grow primarily out sideways. Furthermore, this species tends to shed long ribbons of bark, something that may be frowned upon when 25,000 volt overhead wires are strung up nearby. While detailed impacts are still to be evaluated, Caltrain did produce a Tree Survey and Assessment for its own two-track electrification project that considers Burlingame in some detail. The impact of four-track HSR construction will depend on the selected construction method.

Burlingame is lucky that the right-of-way throughout most of the city is over 100 feet wide, with some stretches over 150 feet wide. The only pinch point is at the southern end of the city, where the tracks are lined by the parking lots of auto dealerships--land that would not be difficult to acquire. For details, consult Caltrain's right-of-way maps for mileposts 13, 14, 15 and 16.

Burlingame has six grade crossings and one pedestrian grade crossing, shown in the profile diagram below (created from Caltrain track survey maps). The tracks already form an undivided barrier through half of the town, serving as a buffer between residential and industrial zones. The first thing to notice is just how low the land lies: barely 15 feet above sea level.

Since all tracks must be grade-separated for HSR, the tracks must either go over or under the roads--keeping in mind that roads are difficult to raise or lower without big impacts to properties along each side. The basic vertical alignment options for Burlingame were first revealed in the CHSRA's preliminary alternatives analysis; the tracks will run at grade until just before Broadway, and continue along one of three possible alignments: above, at, or below grade. That doesn't narrow things down very much.

Despite the city's stated wishes, it's probably safe to rule out a deep bored tunnel that goes far below sea level--that sort of structure is better suited to crossing bodies of water or mountain ranges, not suburban neighborhoods with 100-foot right-of-way and flat topography. That's why the next diagram shows only a 30-foot deep trench.

More than one mile of this trench would dip below the water table (which lies ~10 feet below the surface in this area), and it would likely require constant pumping. The Sanchez creek would need to be "grade-separated," as would the other minor aquifers that run through a half-dozen culverts alongside and under the tracks in this area. This trench might be expensive and challenging not only to build, but also operate and maintain.

Those challenges will inexorably lead back to the much-reviled elevated track solution. The diagram below shows split grade separations, with the tracks elevated by ~16 feet and the roads depressed by a low-impact ~5 feet.

While the elevated solution will not impede physical access from one side of the tracks to the other, it is perceived as a community divider, especially for the one-quarter of Burlingame's population that resides east of the tracks on the other side of Burlingame High School and Washington Park. Elevated tracks promise to be highly controversial, and will have to be weighed against the far greater property impacts of sinking the roads underneath the tracks, in a sort of pick-your-poison situation.

Ultimately, Burlingame will not entirely control its own fate. From a technical point of view, what happens immediately south of Peninsula Ave as the tracks enter downtown San Mateo will have (literally) far-reaching implications for Burlingame, because the tracks cannot rise or fall quickly--thereby forcing the solutions to match up on each side of the border. Because San Mateo is a far more difficult problem to solve, Burlingame will have to build a close collaboration with its larger neighbor to obtain a solution that suits both cities.

NOTE: This post will be updated continuously, as warranted by additional information or new events relating to Burlingame.
Posted by Clem at 11:36 PM