First Nail in the CBOSS Coffin 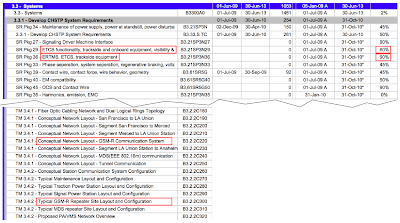 The acronyms ERTMS, ETCS and GSM-R refer to the European Railway Traffic Management System and its components (the European Train Control System and the GSM-Railway cell data standard). The completion levels for these documents suggest that ERTMS has already been selected as the train control technology for the California High Speed Rail System. Quite wisely, the project appears to have selected an off-the-shelf technology standard that was developed and debugged using billions of Euros of OPM (Other People's Money).

The design, integration, testing, and deployment to commercial service of CBOSS is estimated to cost $231 million, before the cost overruns and schedule delays inevitably associated with this type of development effort. While some of this funding was expected to come from the $2.25 billion California HSR stimulus award, how likely is the CHSRA to fund the CBOSS project if it has already selected ERTMS for itself?

Caltrain needs to wake up and stop striving for compatibility with freight PTC. The correct solution is to abandon CBOSS, join forces with the CHSRA to bring ERTMS to the United States, and implement an integrated Caltrain / HSR train control system. Navigating the bureaucratic hurdles of importing ERTMS, ETCS and GSM-R is likely to be far quicker, easier and cheaper than trying to re-invent the wheel with CBOSS. That's especially important because Caltrain's fleet replacement effort cannot proceed until after a robust train control solution is in place. The clock is ticking as Caltrain's antiquated diesel trains fall further into obsolescence, and failure is not an option.

This appears to be the first nail in the CBOSS coffin.
Posted by Clem at 6:10 PM