The Tao of Timetables 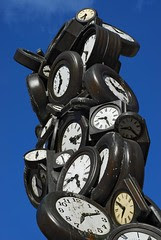 Amid all the hoopla about high-speed rail and quadruple tracking on the peninsula corridor, it's easy to miss the original point: to convey people from point A to point B as quickly and conveniently as possible. The peninsula rail improvements aren't just about pouring concrete and running zoomy trains; they ought to be about providing a service, especially to the dominant users of the corridor, namely local commuters and travelers, people who live and work right here on the peninsula. This important constituency is too often eclipsed by the bright spotlight shining on statewide high-speed rail.

Service is where it all begins, as demonstrated when Caltrain's Baby Bullet started operating in 2004. Because the Bullet increased speed and convenience, ridership soon grew by a third, and Caltrain was featured on the cover of industry journals. But the Baby Bullet was just a baby step compared to what might soon be possible, and Caltrain can't afford to rest on its laurels.

The only three things that will really matter for the future of Caltrain are service, service and service.
(photo by Christophe Dune)
Constructing the Ideal Caltrain Timetable

Caltrain is relentlessly focused on (a) and appears distressingly oblivious to (b).

Type (a) service improvements that can basically be taken for granted are:
Those are very nice, but they're just the low-hanging fruit. Type (b) service improvements are less obvious, but deliver enormous benefits for passengers. They include:
What would an ideal Caltrain timetable look like with all of these improvements? We'll soon find out, but first, a small detour through... 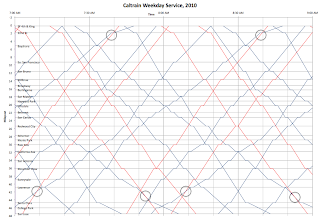 To think about timetables without having to stare at big tables of numbers, it helps to use a graphical representation of rail traffic known as a string graph (also known as a stringline diagram). Traffic is displayed as a time-distance graph with time along one axis and stations (distance) along the other. The movement of each train is represented by a string that connects each station according to the time intervals required to move from one station to the next. In effect, a string graph is the visual equivalent of a timetable. For example, the weekday morning Caltrain timetable is shown in the string graph at right. There are many kinds of strings, each corresponding to a different stopping pattern; the irregular pattern makes it difficult to memorize the timetable between any two stations. The red strings represent Baby Bullet express traffic, and the blue strings represent slower trains. When the lines cross (as circled on the diagram), one train overtakes the other. Today this can only happen in Sunnyvale or Brisbane, where Caltrain already has four tracks.

Going back to our list of ideal timetable features, we can construct a string graph that includes them all. In the real world of operations planning, this is done using sophisticated simulation software, and needs to take into account detailed train performance, speed limits, curves, signal block lengths, off-nominal conditions, and knitting together with the HSR timetable (itself a complicated mess; see pages 16-24).

To first order, it can be done with a spreadsheet. Download a Caltrain string graph (385 kB Excel spreadsheet) to play with it.

The resulting Caltrain timetable is shown in the string graph at right, screen-grabbed directly from the spreadsheet. This string graph shows an example timetable, at a relatively sparse 6 trains per hour, with the following features:
It's quite easy to change these assumptions using the spreadsheet to see what happens. At a glance, the timetable certainly looks more symmetrical and orderly, but how does one meaningfully compare old and new? 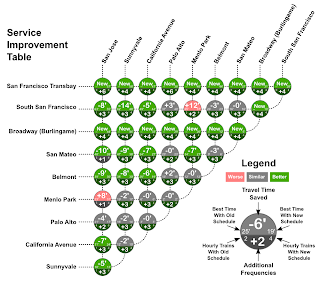 The best way to convey an improvement plan in a way that the average person understands is to publish a service improvement table, an example of which is shown at right. (This example table does not show every station pair; for brevity, it shows a sampling of 10 stations.) This table is built by simply comparing the old and new string graphs. For each station pair along the peninsula, the improvement table shows how many more trains per hour connect the station pair, and how much quicker they are than today. This table is constructed by comparing the string graph of today's timetable with the string graph we constructed above.

The table is a quantitative, objective measure of the degree to which service is improved. All capital improvements on the peninsula corridor should be evaluated and prioritized by their effect on the service improvement table.

Memo to Caltrain: nobody really cares about "growth" or "advanced technology" or "flexible equipment" or "power facilities", or even "less pollution" as trumpeted in the latest electrification update. Those are entirely the wrong selling points. What customers most care about is getting quickly and conveniently from point A to point B.

Damn the pantographs, what you need to sell and deliver is a service plan.

When people ask "what's in it for me", show them the service improvement table for where they live and work. When people worry about the disruption from the peninsula HSR project, they can see that some benefits actually trickle down meaningfully and measurably to each and every city along the Caltrain corridor. Put this table in front of city council members up and down the peninsula. Publish it in local newspapers. Make brochures. Drop leaflets. When Burlingame gets worked up about grade separations, explain to them that service at Broadway will go from none at all to a train every 15 minutes. When Palo Alto frets about community division, show them how California Avenue will see a quadrupling of service, and will be 9 minutes closer to Millbrae.

The dirty little secret is that all the service improvements described above could have been realized without HSR, requiring only a few miles of strategically placed track amplification to enable a mid-peninsula overtake, and using capital improvement funds in a targeted fashion that measurably improves service. (Instead, Caltrain is plowing $300 million into the San Bruno grade separation, which provides zero service improvement, while claiming it is fiscally doomed without HSR).

The peninsula HSR project, which continues to be engineered for extremely high levels of service (despite lowered ridership estimates), will consume precious resources that currently belong to Caltrain--in particular, key portions of its corridor. Constructing HSR in a manner that precludes the above schedule, or something similar to it (i.e. clockface schedules with mid-line overtakes) from being reliably operated will forever stunt the future of the peninsula commute. That can rightly be considered totally unacceptable.

The timetabling criteria outlined in this article form an objective litmus test for an important question that should linger in the minds of peninsula residents: MOU notwithstanding, is Caltrain getting screwed over by the HSR project? Armed with this knowledge, you can be the judge.
Posted by Clem at 9:44 PM