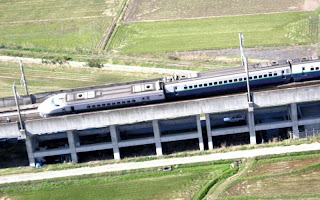 The specter of derailments has been raised in scoping comments and through general opposition to the high-speed rail project in letters to the editor, online forums and blogs. Such comments generally express fear that a train could hurtle off the rails somewhere on the peninsula and smash into residential neighborhoods and schools. The recent train bombing in Russia seems to have renewed this concern. While HSR has a demonstrated safety record that compares favorably to any other mode of transportation, the risk of derailment is not zero, whether from track or equipment failure, track intrusion, terrorist attack, or an earthquake.

Chronologically, the few noteworthy accidents that took place at speeds of 200 km/h (125 mph) and above were traced to the following causes:
Mitigation Measures

Preventing a derailment is always the first line of defense, but once it happens, there are design features that can mitigate the consequences. In all the zero-fatality high speed train accidents mentioned above, the train remained upright and was confined to the track area; those that 'escalated' by departing entirely from the track were deadly. Therefore, so-called Derailment Containment Provisions are an important passive safety feature, about which a study prepared for the Dutch HSL-Zuid project provides a good introductory overview. Such measures can include:
In the United States, one can reasonably argue that our foreign policy could make high speed rail a more attractive target for terrorism than in any other country where HSR exists. Here in the Bay Area, big earthquakes are quite likely. Those real risks are often held against HSR on the peninsula as if they could not be mitigated--but they can. Some form of derailment containment is almost certain to be used on the peninsula corridor, if only in the most sensitive locations such as bridges, tunnels, curves, or schools.
Posted by Clem at 9:40 PM