Update: a different reliable source indicates the land impacts along the corridor were determined (and minimized) by laying out an 87-foot wide corridor, measured over the fence footings on either side. That was a nominal value, with narrower design exceptions possible in highly-constrained locations.

Well, maybe not quite yet. 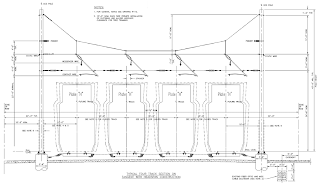 These figures are quite likely quoted for the nominal situation, where plenty of land is available. Indeed, more than two-thirds of the peninsula rail corridor is 100 feet or wider, allowing generous side clearances. Caltrain's own environmental documents, drafted for the electrification project long before HSR came along, include the typical four-track section reproduced at right, with a nominal fence-to-fence width of 89 feet.

Then again, the HSR numbers are incredibly generous by international standards, and probably accommodate vehicular access along both sides of the right of way. (A Department of Homeland Security Crown Victoria is 6'6" wide, for reference.)

The minimum legal side clearances in California are dictated in CPUC General Order 26-D. The absolute minima are 14' between track centers and 10' side clearances to the edge of the right-of-way. Caltrain's engineering standards reflect these constraints in a clearance drawing. None of these standards envision trains running at 125 mph and above, since those have never existed in California. Better numbers can be gleaned from foreign standards, for example the German Eisenbahn, Bau- und Betriebsordnung (EBO). That particular standard requires the following side clearances:
Where the Caltrain corridor is too narrow (such as in certain sections of San Mateo or Menlo Park), technical and political considerations make it probable that the HSR project will prefer adapting to the local constraints before seizing property and revving up the bulldozers.

If one had to make an educated guess about the minimum allowable corridor width, as opposed to the typical width, it would likely be closer to the values in the German EBO and/or the European Technical Specifications for Interoperability (TSI). Using the 16'6" track spacing mentioned above, that comes out to 0.8 m + 3 m + 5 m + 5 m + 5 m + 3 m + 0.8 m = 22.6 m, or 75 feet. The actual minimum for the peninsula corridor is likely to be spelled out in the upcoming draft Analysis of Alternatives.

Those figures are only valid for an alignment at grade level, which is the narrowest option. Raising or lowering the tracks requires additional width for construction.
Posted by Clem at 9:43 PM